If the land of Oz was for realsies (and not just a theme we selected for our Best of Central Oregon issue) Amber Amos would be like the Good Witch, her band of loyal taco lovers floating behind her, bottles of salsa and fresh crema in each hand. If you haven't yet tried Amos' taco delights, well, it might be time for a trip to Redmond. 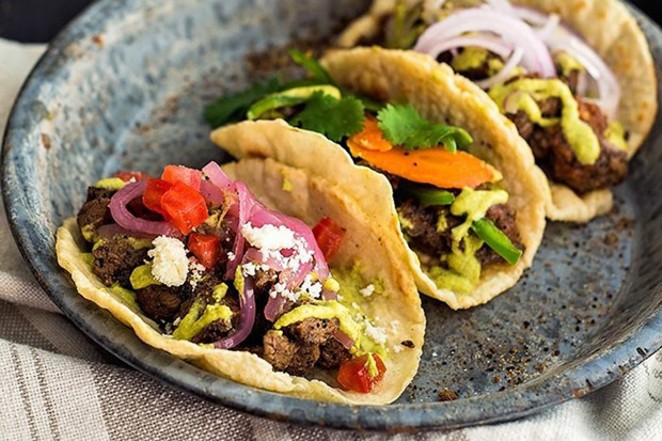 Amos—who just opened a second place, Westside Local, down the way in downtown Redmond (it got second for Best New Restaurant in Redmond)—serves up some awesome takes on classic tacos, including a Root Beer Braised Carnitas that goes heavy—but not too heavy—on the sweetness, while also offering delicious crispy edges. Amos says another popular item among Central Oregonians is the Blueberry Chipotle Brisket. That's a mighty witchin' combo, don't you think? Also popular for the summer are the Baja Fish Tacos.

But when it comes down to it, Amos says she believes readers of the Source voted her cart best in Redmond "Because we remember customers' names. We run the food. We bus the tables," Amos shared. In other words, she and her staff go out of their way to make each customer feel special—and they work dang hard doing it.

Of this year's double-whammy win for Best Food Cart and Best Lunch in Redmond, Amos says to her customers, "We would like to thank them, and let them know we couldn't do this without them."

Best Bang for Your Buck in Redmond