A Theater State of Mind | The Source Weekly - Bend, Oregon
Support local and vocal journalism! Become a Source Insider to help get news and culture to Central Oregon.
Become a supporter Support Us

A Theater State of Mind

'A Tapestry of Arts' unfurls at Cascades Theatrical Company

The pandemic shut down theaters across the globe (including Shakespeare's Globe in London) and ever since they slowly started reopening...I'm guilty of not attending. It's terrible how hypocritical that makes me because at the height of the pandemic, The Globe and several other theaters across the world put their plays on YouTube to try to raise funds for the shuttered theaters. Having those plays to look forward to every week helped get me through the quarantine period of the pandemic.

I've definitely been planning on going back to the theater to see the Greenhouse Cabaret's upcoming interpretation of "Hedwig and the Angry Inch," but now I have something to bring me back into the theater sooner with Two Twisted Sisters and Cascades Theatrical Company's "Tapestry of the Arts."

Some of my all-time favorite local performers are teaming up to put on this one-weekend-only buffet of performing and visual arts, including music by David Salas, "Hen Party" and "Their First Date," a pair of shorts written and directed by Michael and Laura Lee Coffman, "Hooked," a dramatic one-act by Sara Freedman, True Tales by Dan Cohen, singer/songwriter Eli Seth Lieberman performing original songs, choreographer Michelle Majeski and her ensemble performing classics from "Chicago" and "Cabaret," and "Paul's Bed" written by Howard Schor and directed by Mary Kilpatrick. 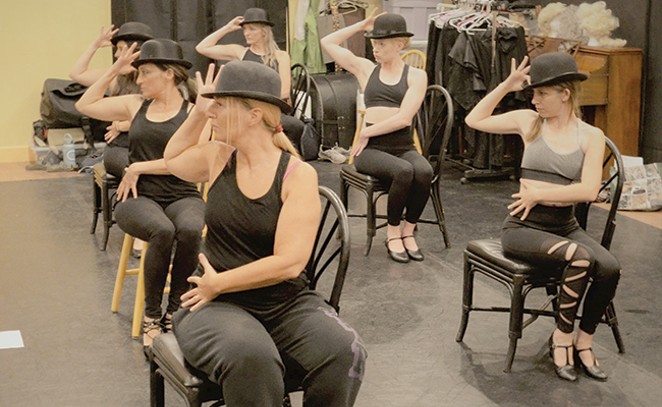 Photos by Howard Schor
The cast of "Cell Block Tango," with Michelle Mejaski as choreographer/director.

I asked Two Twisted Sisters' Howard Schor about the origins of the show and how he chose to combine music, dance, painting and theater.

"For many years Mary has wanted me to write a one-act about her very dear friend and mentor, Paul, who was an actor/dancer in L.A. and on and off Broadway. He was one of the first 200 to die of AIDS in 1981. The story is about a Christmas party that his best friends threw for him around Halloween because they didn't know if he would make it to Christmas. It is sad, poignant, quite funny and the ending is very inspirational and uplifting. Mary said, 'Why don't we do a Vaudeville show?' Ah, too much goofing around and jokes...  I said to myself. Time went by... And one day about eight months ago I happened to look up the etymology of the Vaudeville and I was stunned to see that it is from the French 'voices of the city.' Boom! I went to Mary and told her the definition and I would write 'Paul's Bed' and get artists from all different genres and put up a 'Tapestry of The Arts.'"

Majeski has done choreography in Bend for as long as I can remember (including trying to teach me to soft-shoe in "Young Frankenstein"), so getting to see her put her considerable talents toward "Cell Block Tango" from "Chicago" and "Mein Herr" from "Cabaret" has me unreasonably excited.

"Bob Fosse is my favorite choreographer," says Majeski. "Both numbers are sultry and provocative in a classic Fosse jazz style. We're excited to be a part of 'Tapestry of the Arts' and to share the stage with longtime friends and colleagues."

Michael Coffman, who is directing two of the comedic pieces of the night, appreciates the varied segments of the evening.

"There is a bit of everything in this show," says Coffman. "It's the perfect program for our community members, many of whom are still crawling out of our caves, to once again experience theater and art."

I know I'm one of those people slowly re-integrating into the theater scene and "Tapestry of the Arts" seems like a good place to start.