A Visit from a Prankster

If you ask Ken Babbs what he's up to these days, he'll tell you his life largely revolves around the rearing of a new Golden Labrador puppy, named Mabel. If you've ever raised—or have even been around—a lab puppy, you know why she's taking up so much of his free time. Babbs, a founding member of the Merry Pranksters, lives a pretty chill life, settled down on a 6-acre plot on the eastern slope of the Cascades with his wife, a cow and calf, and now, Mabel. On top of puppy rearing, chopping firewood is his jam. 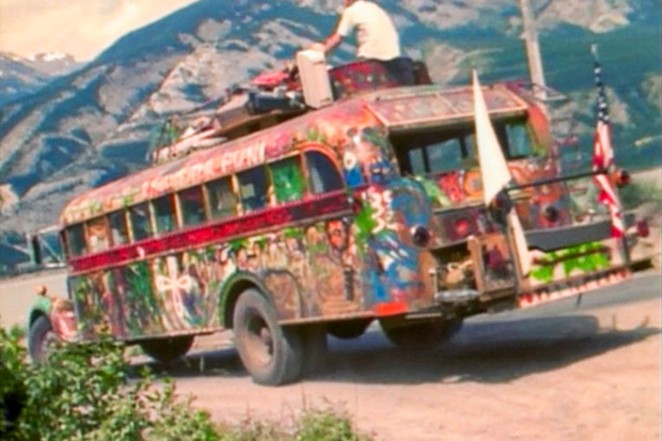 Rcarlburg, Wikimedia
Ken Kesey's original bus, "Further," rolling down the road to adventure. The Further bus that Kesey's son now drives is a later iteration of the bus.

It's a far cry from some of his more free-wheeling days—ones that would be eventually entered into the canon of hippie fandom through books including Tom Wolfe's "The Electric Kool-aid Acid Test." In 1958, Babbs met Ken Kesey in a graduate writing program at Stanford University, the two becoming fast friends. Most will be at least somewhat familiar with the story of the Pranksters, who traveled around the country in a magical school bus named Further, experimented with psychedelics, espoused creating art out of real life, buddied up with a band that would eventually be named Grateful Dead and wrote extensively about their exploits. Babbs and Kesey eventually teamed up to write Kesey's final novel, "Last Go Round," in 1994, set at the Pendleton Roundup in 1911.

"It was like a big tsunami; we were lucky to ride the wave," Babbs said of the period of experimentation and opening of consciousness that was the 1960s. Starting out, Babbs told me he and the Pranksters weren't envisioning being infamous ringleaders of the psychedelic circus, but as he said, chuckling: "Tom Wolfe's book made us the poster children of the '60s."

He may largely live a quiet life today, but being among those "poster children" still affords Babbs plenty of opportunities to get out. This week, he'll appear at Worthy Brewing on Wednesday for the event, "Ken Babbs: Stories from The Pranksters, The Bus and Woodstock."

Babbs said he plans to read from his most recent, as-yet-unpublished novel, "Cronies," which recalls his adventures with Neil Cassady and Kesey, as well as talking about his insider knowledge of the making of "One Flew Over the Cuckoo's Nest." Kesey worked at a mental hospital while working on the novel—a job that would help him bring the daily life of that type of facility to life.

Submitted
Babbs describes himself as a consummate entertainer—on top of being dang good at cutting firewood.

In Bend, Worthy Brewing may be the ideal backdrop for the event, since it, too, contains its own ties to Oregon hippie-days lore. The tables, bartops and ceiling in the brew pub were salvaged from the former Oregon State Hospital, where "One Flew Over" was shot in 1975.

"I met producer Michael Douglas in '74 or '75 at an OSU-UCLA basketball game at Gill Coliseum and got hooked on the story," Roger Worthington, owner of Worthy Brewing, told the Source Weekly. "Most of the hospital was demolished in 2009, and I bought up 16,000 square feet (of wood)."

Worthington describes the event as being, "Art, courage, chemistry and space travel all in one."

For Babbs, who also spends much of his life playing music and writing, events such as these represent a re-ignition of a certain type of consciousness, fostered by his old pal Kesey, who died in 2001 in Eugene, Oregon.

Quoting Kesey, Babbs said, "The only true currency in America is that of the spirit—so anything you can do to bring people's spirits up is a good thing."