My boyfriend asked me for nude photos of myself. I reluctantly sent him one. I feel very uncomfortable about sending it, and I don't want to send more — though sending naked pics now seems very common. Am I paranoid? 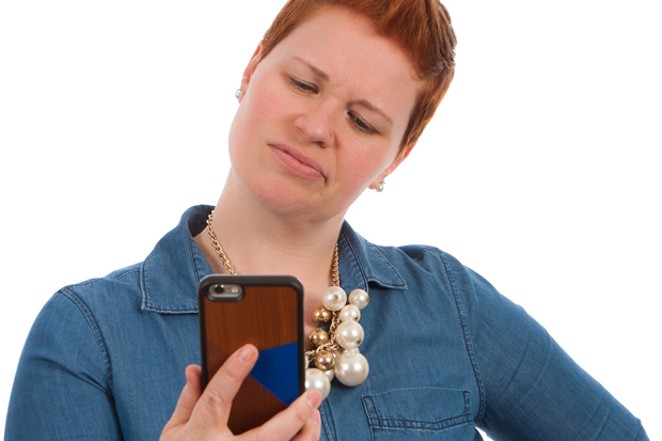 Unfortunately, "online privacy" is one of the more absurdo oxymorons—a contradiction in terms on the level of "planned spontaneity," "working vacation," and my favorite: "civil war." (The warring factions yell "Thank you!" and "No, thank you!" across the trenches until more people pass out on one side than the other.)

Digital-world technology has made our lives vastly easier, more efficient, and more fun, but it can also cost us big-time —on a scale previously unseen and even unimaginable throughout human history. Back in the Middle Ages, no one had to worry about some brainy malcontent hacking their "cloud" and releasing all their nudie shots to the Global Village. At worst, one other person might come upon a lone sketch of them in a state of undress or maybe a few slutty etchings.In other words, you are far from unreasonable to say no to sending any further nudiepix, and it would not be unreasonable to ask your boyfriend to delete the one you sent him (explaining your privacy concerns). That said, he might find that request unreasonable, vis-a-vis how common it is for people to sext those they're dating—or (when those people are guys) show random strangers on the internet their erect willy.

If he does find it unreasonable, you might feel bad saying no. Women, much more than men, tend to be on the high end of the spectrum of the personality trait "agreeableness" (first identified in the 1930s by psychologists Gordon Allport and Henry Odbert). High agreeableness manifests in a "pleaser" personality: being kind, empathetic, cooperative, and driven to have positive interactions with others (often to one's own detriment).

Understanding that you might have a predisposition to say yes can help you stand up for yourself. At first, announcing your boundaries—saying no—will likely feel bad. Be prepared to override that feeling and act in your best interest. Sure, many people share all sorts of naked 'n' crazy without having it exposed to the universe, but there's always that possibility. At a work retreat, your co-workers should not try to bond with you with: "Don't you find the Cool Whip requires too much cleanup?"

I'm a guy in my early 20s. I love my older brother and look up to him. But starting in high school, girls flocked to him, and he was crowned prom king, though I'm objectively more attractive. Recently, a girl I really liked and became friends with started dating him after I introduced them at a party. Neither knew about my feelings for her because I never told them, but I now feel resentful and envious of my brother.

Ideally, if a woman is asked to guess your "spirit animal," her answer won't be, "Hamster lying cold and dead in the corner of his cage?"

Your "I feel resentful" is a bit entitled snowflake, since you never did anything to let this woman know you were interested. In short: Good things come to those who ask. (Full disclosure: often, though not always.)

As for your envy, research by evolutionary psychologist Bram Buunk overturns the bad name this emotion has long gotten. Envy is actually adaptive—functional—and its function appears to be making us go: "Whoa! He's way ahead of me! Gotta put on my lady-chasing track shoes!" Envy is only a destructive emotion when people experiencing it engage in "malicious envy": trying to sabotage those doing better than they are rather than trying to up their own game and outdo them fair and square.

In the future, when you want a woman, don't silently watch as she wanders off into another guy's arms. Say something! As I noted, it won't always end well when you hit on a woman, but possibly getting rejected is the cost of possibly having dates, sex, and love.

That said, there's a way to repurpose bummerino brush-offs into "small wins": organizational psychologist Karl Weick's term for small positive outcomes experienced while failing to solve a big (or even massive) problem. An example of how that might play out in your head: "Okay, that girl I hit on at the bar was nasty, but yesterday, I would've spent all night just staring at her. Today, I grew a pair and approached her. Yay, me!"

Though this is admittedly the slow, emotionally grubby approach, you should find it much more effective than your current MO: waiting for a woman you're into to read your mind and have herself shot out of a cannon through your open window and into your love pit/bed.