Winter is Finally Coming. Drink These Beers to Fend it Off. | The Source Weekly - Bend, Oregon
Our journalism makes a difference, and so can you. Become an Insider and support The Source Weekly!
Find out how Support Us

Winter is Finally Coming. Drink These Beers to Fend it Off.

Whether you celebrate Santa or Saturnalia, sip these seasonal suds

I'm not even sure if serious wine lovers enjoy mulled wine, but I can assure you beer lovers love "winter warmers." These are ales that are typically brewed to higher gravities, meaning punchier in the ABV department so as to fight off Jack Frost. While we can start to get excited that the 8th annual Winter Beer Festival (that should've been the 9th annual, but...) returns on Feb. 5, 2022, we don't have to wait to start enjoying a little liquid Christmas.

It's not accurate to call them Christmas beers when they've been around since before Christmas itself. For millennia, agrarians celebrated the winter solstice by brewing beers made heavier with extra grains and maybe some fruits and spices. From the Romans gorging themselves on strong brews during Saturnalia to the Vikings drinking their horns dry during Yule, pre-Christians took their winter intoxication seriously, so as to commune with deities and supernatural spirits. 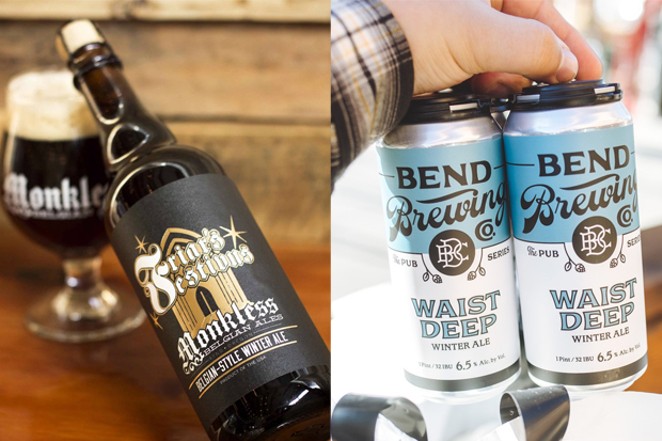 Deschutes already spoils us with its annual release of Jubelale, but no one would argue with a little something extra. A red wine barrel-aged variation would've been welcome, but instead of merely maturing Jubelale in oak, the brewery further embellished by adding cherries and vanilla. The result is that the base beer, decadently malty like liquid toffee pudding that was already nearly 7% alcohol, is brightened up with the cherry juice, softened with the vanilla and fleshed out with the noticeable jammy wine notes. It may not be flambéed like cherries jubilee, but it's no less comforting and warming.

There may not be any monks at Monkless, but they get cloistered as frock! Swapping out robes for Snuggies, the brewers regale us each season with Friar's Festivus, a rich quadruple ale. A "quad," it can be said, is twice as special as a Belgian dubbel. Belgian ales are commonly augmented with invert or brewing sugar and typically feature a yeast strain that throws phenolic notes of clove. This one is fermented with two special Belgian strains and dark, fermentable syrup that kicks things up into the double-digits of alcohol content. And if a quadruple somehow isn't enough for ya, revisit the pre-pandemic brewed 2020 The Closer. Billed as a "quintuple" (because even though there's no such thing in Belgium, Americans love to take things to the next level), this corpulent abbey-style ale pulls a Quasimoto by ringing your bell to the tune of 12% ABV. Embellished with raspberries and cocoa nibs, this is what jolly-in-a-can tastes like.

The only thing better than an official Red Ryder carbine action model air rifle is an official Black IPA Cascadian dark ale. Bend's disc-golf themed brewery already makes this CDA, one of the few you can still find in Cascadia, but this holiday edition was fermented with its "darkness" yeast, further ameliorating the balance of hops and roast. When West Coast IPAs already taste like pine needles and stouts already smack of chocolate, this beer presents as rich, dark hot cocoa sipped beside that Lodgepole Pine you cut down in your secret spot in the Deschutes National Forest.

BBC's official winter warmer is Waist Deep arriving for the second winter in a row. At a common alcohol volume of 6.5%, it drinks like an English, malt-forward ale with dark and dried fruit notes compliments of the malt-yeast-hop trifecta. Stronger than a pale ale yet far from a barley wine, making it on the crushable side of wintry. The real stocking stuffer comes courtesy of a collaboration beer. Ostensibly a collab with this canned beer's exclusive retailer, Newport Avenue Market, Not Your Usual is a rich, imperial stout made richer both by conditioning 40 pounds of Honduran coffee beans courtesy of our local Bohemian Roastery, plus aging longer than a year in Oregon Spirits' bourbon barrels. The result is a decadent, viscous, chocolatey beer that has just enough caffeine kick to keep you from conking out by the fire.

And from up in Sisters, Three Creeks gifts us with a couple treats apropos of aprés ski. Hoodoo Voodoo—celebrating Central Oregon's smaller ski resort—can be seasonally fitting when the malt bill is a bit chewier (but well shy of double IPA territory) and still connotes grapefruit rind and pine tree from classic PNW hops like Columbus, Centennial and Liberty. While Hoodoo Voodoo is now available in cans, you'll only find Rum Barrel-Aged Winter Warmer on draft. This beer is 2019's Chill-Axe winter warmer that just woke up from hibernating in rum barrels. Given that rum is distilled sugar cane, although it only weighs in at an elf hair over 7%, you'll be seeing sugar plum faeries after a couple pints.

The Bend Ale Trail Relaunches, with More than Just Breweries

Winter Cocktails to Combat the Cold