Editors note: This week, the Source team imagines what outdoor communities can do—and are doing—to make them more responsive to climate change

"The bicycle is a simple solution to some of the most complicated problems in the world." 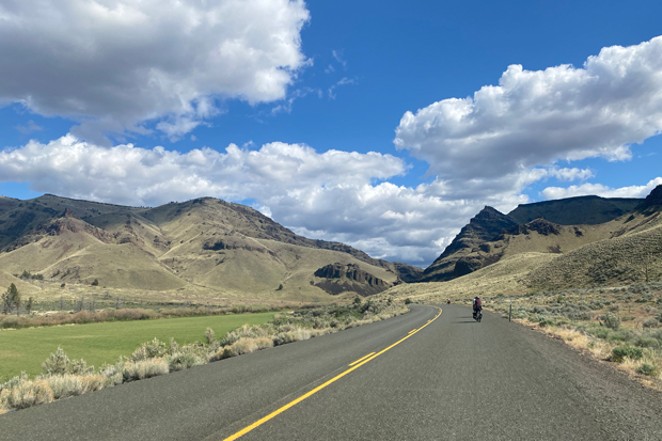 Nicole Vulcan
Bike touring allows one to explore open spaces and take in the wonders of the natural world at a slower pace... which may add to one's appreciation and concern for protecting it.

COVID-19 may have been the impetus for many people to get back on the bikes they haven't touched since their school days, but there's another important reason for all that bike-riding to stick around: It's one way to lessen one's environmental footprint while spending time in the natural areas that restore our energies and replenish our souls.

With transportation contributing to 29% of the United States' carbon emissions in 2019, according to the Environmental Protection Agency, I take personal exception to the notion that only a handful of corporations and governments should be responsible for changing the trajectory of the current climate crisis. Individual actions, when accumulated among millions or billions of people, can and do matter. If Paris, France, is turning some of its biggest streets—including the Rue de Rivoli—over to bikes rather than cars in the name of adapting to climate change (and dealing with the growing pains of that, too), it stands to reason that some of those aforementioned governments do see value in changing individual habits in the name of reducing emissions.

With the climate crisis, and now COVID, it's no wonder that travel companies as big as Conde Nast are proclaiming bikepacking—the off-road version of bike touring—as the "travel trend we're trying this year."

Recent research supports that notion as well. In a study published this year in the Proceedings of the National Academy of Sciences, researchers found that cities that added bike infrastructure saw cycling increase 48% more than in cities that didn't add infrastructure such as bike lanes.

With the climate crisis, and now COVID, it's no wonder that travel companies as big as Conde Nast are proclaiming bikepacking—the off-road version of bike touring—as the "travel trend we're trying this year." As the author of that January 2021 article aptly stated, you don't have to be an expert to get out on two wheels.

The Adventure Cycling Association also reports an increase in interest.

"I can tell you we have definitely seen an increase in interest since the beginning of the pandemic," said Dan Meyer, deputy editor of the ACA's magazine, Adventure Cyclist.

While I'm far from an expert, these are a few tips I've picked up in my pandemic-era bike-tour travels. Like the climate crisis itself, my focus has been on reducing and reusing—hence, I keep it light and buy or trade for used gear whenever possible.

Food, not gas, is the fuel

Instead of gassing up the rig, with bike touring or bikepacking, the "fuel" for these adventures is the stuff that goes into your own body. Foodies will delight in bringing that extra-special bag of dried mushrooms for a fancy ramen, while others go a bit more no-fuss. Bring a burrito for dinner and a PB&J for breakfast and enough water (or a water filter, if you know you'll have water sources along the route) and you are off.

Just like backpacking, people's setups for sleeping can run the gamut. You can spend thousands on gear from the newest gear shop; or you can manage with what you may already have. With gear shops that let you consign or sell your old stuff and exchange it for other new-old stuff, getting overwhelmed by the hungry beast of outdoor-gear capitalism doesn't have to be the name of the game. Of course, you're going to need a bike; but there, too, don't overthink it. If you're comfortable enough riding that bike across town, it's good enough to ride overnight. If that's not an option, see if there's a friend to let you borrow one. In gear-heavy Central Oregon, decent bikes can even be found at thrift shops and online marketplaces—sometimes for decent prices.


Same goes with what you bring along. Strap a sleeping bag and hammock to your handlebars and you have the makings of your first climate-adaptive recreational overnight. Plus, up your setup a bit more by adding a rack and panniers to that gravel bike (another hot trend in cycling over the past several years), which will let you carry plenty of water, food, clothing and repair tools for a night or two or three.

Perhaps the biggest piece of advice—besides not overthinking it—I can offer is to seek out groups or individuals who can teach you what they know. Local route-makers such as Dirty Freehub have been a godsend for finding cool overnights.


"We have a route called Townie that teaches people to commute across town," Linda English of Dirty Freehub told the Source. "It's a really popular route. I think people have used it as a way to learn how to get out of Bend without getting in a car." Interest in bikepacking among Dirty Freehub's followers has also increased, English reported.

Local groups that advocate for safe cycling, such as Bend Bikes, or the love of trail riding, such as the Central Oregon Trail Alliance, can be awesome places to meet people in the area. Organizations devoted to inspiring people to bike tour, such as the Adventure Cycling Association and Warm Showers can provide support. Local bike shops such as Gear Fix also occasionally hold bike-repair clinics to teach people how to fix their own bikes.

Bike touring or bikepacking may be the things we do to foster joy and nurture our love of wild places—and happily, they can also be ways to adapt our recreation to meet the changing dynamics of the climate as well.