New and returning city councilors took their oaths of office, but the new mayor's ascension leaves a vacancy the City must fill within a month

City councilors appointed Mitchell and Sehgal to their seats in July, after former councilor Rita Schenkelberg and former Mayor Sally Russel resigned from their positions. During their outgoing remarks, Mitchell said they hoped to honor Schenkelberg, who cited attacks to their race and nonbinary gender identity as one reason they stepped down. 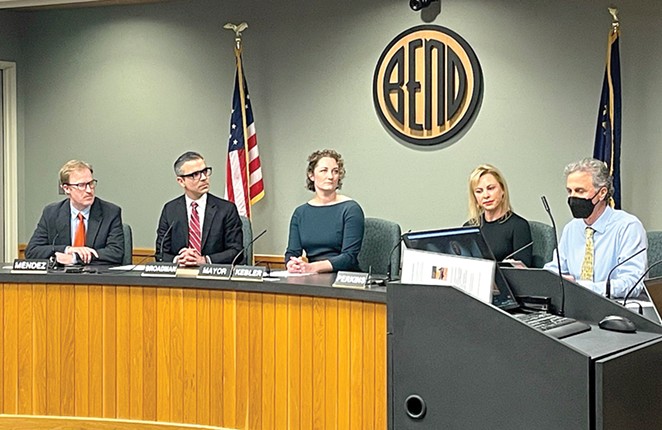 Courtesy of the City of Bend
The new Bend City Council takes their seats behind the dais for the first time on Jan. 6.

"I'm actually sitting up here thinking of Councilor Schenkelberg, and for those members in our community of non-dominant culture," Mitchell said.

New Councilors Mike Riley and Ariel Méndez and returning Councilor Barb Campbell recited their oaths of office and gave brief statements about their outlooks and priorities. Riley pointed to housing, houselessness, environment, child care and multimodal transportation as issues he's excited to work on. Mendez spoke about fostering a culture of respectful dialogue. And Campbell reflected on her time on the past five City Councils and thanked her opponents for participating in the democratic process.

Kebler's elevation left a seat empty, and the City must find a replacement within 30 days per the City Charter. Fourteen people applied to fill the vacancy by the deadline on Jan. 6, including two candidates who lost in the November elections — Julia Brown and Karon Johnson. A council vacancy subcommittee combed through the resumes and selected John Heylin, Megan Norris and Bryan Brown as finalists.

Heylin is the owner of Unofficial Logging Co., an axe-throwing bar and restaurant in downtown Bend. He said his time on nonprofit boards taught him the importance of active participation in meetings, and that his knowledge of sustainability and business practices would benefit the City.

"I envision Bend being a place where people of different backgrounds, beliefs and identities are comfortable and accepted. I would love to support pedestrian, bike and public transit. I also want to push for a more environmentally sustainable town that can survive droughts, recessions, and future epidemics," Heylin wrote in his application.

Norris is currently the forward planning manager at Hayden Homes, but has a diverse work background with experience as an executive at an investment firm, a campaign manager for the Sierra Club and the child care accelerator for a group of Central Oregon organizations.

"I care deeply about our city, its beauty and sense of community and believe that my background and life experiences uniquely position me to serve in an impactful way. My vision for the City is for it to thrive on the principles of inclusivity, sustainability and thoughtful governance. In that vein, I will work to bring positive solutions to key issues we face – affordable housing, homelessness, child care, and environmental protection," Norris wrote.

Brown is the project manager for Rickabaugh Construction, a civil construction company. He said his knowledge of construction would be beneficial for the council, that he's able to work well with diverse teams and his hobbies as an outdoor enthusiast have given him a connection with the community in Bend.

"Such a wonderful city is bound for growth and I believe it is the biggest challenge we face as residents. I am confident that my experience as a Construction Management professional could be of value to the City Council as resource to help navigate difficult questions that arise from the impacts construction has on the City," Brown wrote.

City Councilors reviewed the three applicants at a special meeting on Jan. 9 and suggested they also interview Greg Delgado for the position. Delgado is a community organizer for Central Oregon Jobs with Justice and has worked on boards for Latino and LGBTQ organizations.

"I think one of the things that I find attractive about Greg is I think he has a history of working with really trusted organizations like the Latino Community Organization. I think people really respect him and look to him as someone that they trust. So, knowing he has those connections in the community is a positive," Méndez said.

City Councilors are scheduled to interview the four finalists at a meeting on Jan. 11 before making a decision.

Méndez's election to the City Council prompted him to leave the board of the Bend Park and Recreation District. State Representative Jason Kropf also left the BPRD board, citing increased responsibility in the Oregon House of Representatives. The BPRD Board of directors filled the vacancies with Donna Owens and Jodie Barram at a meeting on Jan. 3. Owens served on the BPRD budget committee and had a long career with the U.S. Forest Service before retiring in 2018. Barram is a former Bend City Councilor and has worked in the communication field throughout her career. Board Chair Deb Schoen celebrated the appointment of the two new board members in a press release.

"Bend's first parks were established more than 100 years ago by strong women and this is the first time there is a majority of women on the board and it is to be celebrated," Schoen said. "Donna's and Jodie's past service to this community and to others is greatly appreciated and I look forward to working closely with you."

Jack is originally from Kansas City, Missouri and has been making his way west since graduating from the University of Missouri, working a year and a half in Northeast Colorado before moving to Bend in the Spring of 2021. When not reporting he’s either playing folk songs (poorly) or grand strategy video games,...
Read More about Jack Harvel