The Healing Power of Breath

New Age therapies include some unconventional practices... and are met with a fair amount of skepticism. Therapies such as crystal healing or aura cleansing can be difficult concepts to accept blindly. When first introduced to breathwork, Bend local Jon Paul Crimi was a skeptic, too.

"I'm from Boston," he explained. "In Boston, you can't blame your problems on Mercury being in retrograde. If your life's a mess, you can't say, 'Ah, well, it's Mercury.' That just wouldn't fly." But he explained that his first breathwork exposure left him doubtful. "It was just a lot of weird woo-woo stuff, crystals and essential oils, all of that. But when I actually laid down and did the breathing technique as instructed, the results were undeniable." 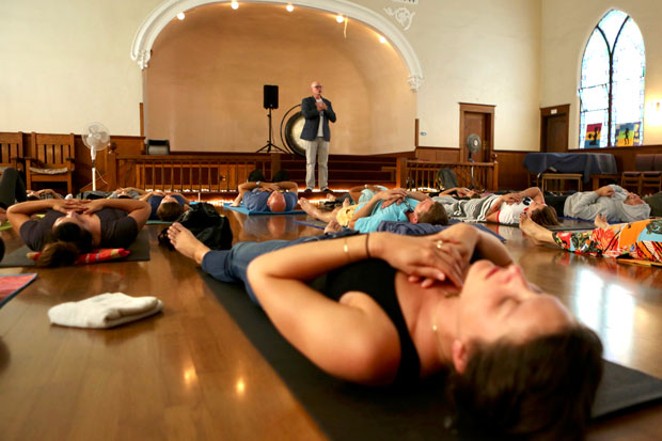 The practice of breathwork (around for centuries, but gaining awareness around 40 years ago) teaches control and manipulation of breath in order to promote emotional and mental healing. While participants report results like mental clarity, emotional purging, increased alertness and improved mind-body connection, others notice actual physical benefits. A study conducted by the Yale School of Medicine in 2014 found that the epinephrine surge during hyperventilation causes the immune system to increase anti-inflammatory activity. "Subjects who were taught a breathwork routine had less severe inflammatory responses after exposure to IV bacterial toxins than those who didn't," the study reads.

"A lot of health problems stem from emotional issues," Crimi explained. "Unresolved trauma can make us physically sick." The practice isn't just for those with obvious issues, either. According to Crimi, we're all holding onto something. "Who isn't depressed or anxious nowadays?" he noted. "Of course, some people are walking around with more trauma than others, but it's really rare to meet someone who doesn't need it." He described his own history of substance abuse, and how breathwork opened a door.

"I didn't realize how much stuff I had trapped in my central nervous system; so much grief, so much sadness, so much anger," he said. "I'd done therapy, 12-step programs, all of it. After my first session I was wondering why no one had introduced this to me sooner—when I was 13 or 14 years old and depressed, suicidal. After one session I was hooked, and I've been doing breathwork every day for the past eight years. Now I'm calmer, nicer, lighter, happier... as soon as I let go of my preconceptions and allowed myself to reap the benefits, my life changed completely."

“It was just a lot of weird woo-woo stuff, crystals and essential oils, all of that. But when I actually laid down and did the breathing technique as instructed, the results were undeniable.”—Jon Paul Crimi

Crimi initially had a difficult time selling his friends on the idea—mostly because of the assumptions people made when hearing the unfamiliar and "out-there" concept of self-healing through controlled breathing—so he changed things up.

"I thought, if I made this practice more accessible, maybe more people would be willing to try it." He stripped his practice of crystals, incense and essential oils, and incorporated blaring rock music and what he described as a "Tony Robbins-style" experience.

"It's actually really intense," Crimi explained. "I blast Fleetwood Mac, the Stones... it's a powerful ride. The goal is to clear out all of the stress, anxiety, depression and grief and fill back up with gratitude and love."

After a slow start, the practice has been well-received in Central Oregon. His workshops now consistently include about 240 participants. "Bend is awesome," he said. While it's been his home base for over a year, he also flies back and forth to Los Angeles to work with high-profile celebrities. "I was surprised by how receptive people here were. They're serious about self-care, they show up on time and they actually want to do the work."

Cayla graduated from UCLA with a degree in playwriting, soon after realizing that playwriting is not a viable career option. Fortunately, this led her to journalism, and she is thrilled to be part of such a unique and fun-loving team. Upcoming local events? Send them her way!
Read More about Cayla Clark

Your Guide To A Healthy Winter