Things are Getting Weird

An attack of a Bend Uber driver, a missing Arizona snowmobiler and an explosion near Bend: Is this what isolation does to us?

A handful of seemingly unrelated incidents in Central Oregon this weekend have a connecting thread: They're all things that local law enforcement has to deal with, even while they attempt to maintain the maximum social distancing possible.

"As the assault transitioned to outside the vehicle Mastalir began to slam the driver’s head off of the asphalt roadway. The driver successfully fought Mastalir off inside and outside of her vehicle with the use of pepper spray, a handheld stun gun, and a collapsible baton." - Deschutes County Sheriff's Office account of Uber driver attack

An attack on an Uber driver in Bend


This morning, the Deschutes County Sheriff's Office reported that Bend man was in custody, following an alleged attack on an Uber driver.

The Uber driver told officers that she picked up Mark Mastalir Saturday night. Mastalir, age 52, was intoxicated, the driver told cops, and didn't give the specific address where he was going on Skyline Ranch Road, telling the driver he would lead her to the right address.

As the DSCO reported:


"While in route, Mastalir attacked the driver by pulling her hair and grabbing her right arm, causing her vehicle to swerve dangerously into oncoming traffic and onto the shoulder of the road. Mastalir continued attacking the female driver after the vehicle had stopped. As the assault transitioned to outside the vehicle Mastalir began to slam the driver’s head off of the asphalt roadway. The driver successfully fought Mastalir off inside and outside of her vehicle with the use of pepper spray, a handheld stun gun, and a collapsible baton."

The driver then called 911.


"Mastalir suffered severe lacerations to his head, and was treated by medics on scene before being transported to St. Charles Medical Center for additional care. After his release from the hospital, deputies booked Mastalir into the Deschutes County Adult Jail on the charges of Kidnap 2nd Degree, Assault 2nd Degree, Unlawful Use of a Weapon, Coercion, Menacing, Reckless Endangering, Criminal Mischief 1st Degree and Resisting Arrest."

The driver was also treated on scene by Bend Fire and went to St. Charles Medical Center in Bend.

According to a story published in Cascade Journal in 2015, Mastalir is a former all-American runner who in 2014 built a 3,500-square-foot home in Tetherow——a development that includes Skyline Ranch Road. Mastalir's LinkedIn profile shows him as Co-CEO at Halo Neuroscience based in San Francisco.


A missing snowmobiler near Bend


And even while state and local officials continue to remind people that staying at home—ideally in your local area—is the best thing to do right now to help prevent the spread of COVID-19, tourists continue to be here. In the case of one Arizona man, they're also creating more strain on local resources.


"I think there are people from other communities who see us as an outlet." -Kevney Dugan, Visit Bend

On Friday night, Judy Pieratt, a resident of Arizona, called 911 to report that she and her husband had gotten separated while on snowmobiles on Snowmobile Trail 6 near Moon Mountain. Her husband was an experienced rider, the woman said, but was unfamiliar with the area.

Deschutes County Sheriff's Office
John Pieratt, 54, of Arizona got lost on his snowmobile near Bend Friday. A small army of volunteers, deputies and AirLink crews went out to find him.

The man, John Pieratt, age 54, was located Saturday morning—but not before deputies, DCSO Search and Rescue volunteers and AirLink crews searched for him until 2 am Saturday morning, starting again at 7 am.

DCSO said John Pieratt was able to call 911 from his location around 9am Saturday in the meadow area in the upper Bend Watershed.

With Oregon stopping one step before a shelter-in-place order, organizations including Visit Bend—the marketing agency tasked with promoting tourism in Bend—continue to ask visitors to stay home.


"The reality is that it is hard to 'stop' people from coming, and unfortunately there is still a narrative that being outside is the thing to do," Kevney Dugan, president and CEO of Visit Bend told the Source Saturday. "Hence, I think there are people from other communities who see us as an outlet. Another reality is that although we have a broad reach, we don’t communicate with everyone. I really do feel Visit Bend has been as proactive as any agency in using our skills to support the local community over the last week or two, and has gone as far as any tourism agency to be honest about not traveling here at this time."

An explosion near Bend 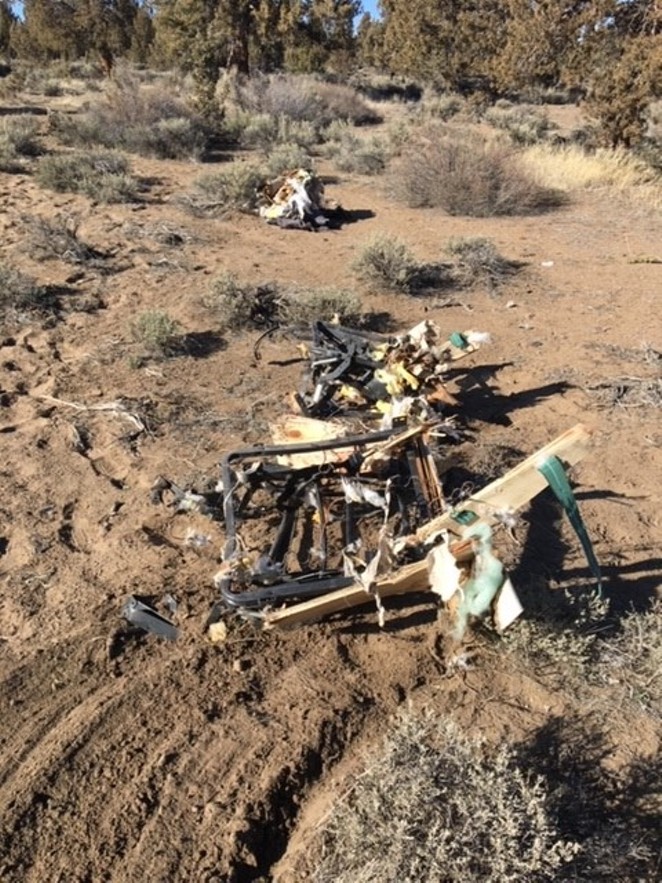 ✖i                                       According to DCSO: "On 03/21/2020 at about 11:45 hours, Deschutes County 911 received a report of a loud explosion in the 68000 block of Fryrear Road. Deschutes County Sheriff's Office deputies responded to the area along with Cloverdale Fire Department personnel. Upon arrival, deputies located debris strewn about the area and found a couch frame hanging from the power lines. The investigation revealed unknown person(s) detonated an explosive device which blew up a mattress and couch. "The blast was significant enough to launch the couch frame into the air where it hung up on the power lines which were approximately 20-30 feet above the ground. A resident approximately a mile away reported the blast shook the windows of their residence. No significant power outages were reported in the area. "A late model, white, full-sized Chevy or GMC pickup was seen leaving the area. It was described as lifted with off road tires and possibly had out of state license plates. It was operated by a white male and white female with long dark hair. They were believed to be in their 30s. An Oregon State Police bomb technician responded and investigated the scene along with a Central Electric Cooperative crew who removed the frame from the powerlines." The Deschutes County Sheriff's Office is asking anyone with information regarding the incident to call the non-emergency dispatch line at 541-693-6911.

See all our coronavirus coverage at our Coronavirus HQ.