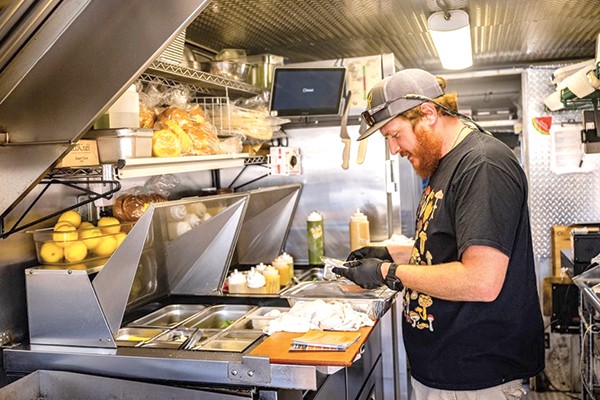 uckeyswoodsman
Bend’s food cart scene is growing and continues to impress. Here is a behind-the-scenes shot from @luckeyswoodsman. Thanks for tagging us in this photo of hard work in the Luckey’s Woodsman kitchen. Priding themselves on quality of food and adventurous menu, this food cart knows what it’s doing. Head over to the Box Factory for some mountain nachos, local ranch burgers and more! Don’t forget to share your photos with us and tag @sourceweekly for a chance to be featured as Instagram of the week and in print as our Lightmeter. Winners receive a free print from @highdesertframeworks.

Guest Opinion: An Open Letter to the Bend City Council

Congratulations on your election. Your tasks are going to be challenging. The members of the Neighborhood Association Round Table suggest one way to facilitate decision making is to use the already agreed-upon plans developed by residents and city staff as they are an expression of community values.

Bend residents voted for a Transportation Plan and Bond to provide residents with more transportation options. So that should be a guiding light when you are reviewing proposals. The Community Climate Action Plan adopted in 2016, is intended to reduce carbon emissions and make our city more resilient. It states:

"To achieve our climate goals, we must work together to reduce our emissions. The community helped create this Plan, and the community has a key role in implementing it. This means the City must partner with other public agencies, the private sector, and community organizations to implement plan strategies. In addition residents and businesses will need to utilize the new programs and investments suggested in the Plan reduce their own emissions."

As residents and property owners we ask that the City administration and Council use this plan as a day-to-day guide in making decisions about City actions and public and private development. It was developed with community input and represents a consensus.

So our request from the Neighborhood Association Round Table to the new City Council is to familiarize yourselves with the Community Climate Action Plan and the Transportation System Plan and the other documents in order to apply those goals and strategies to proposals and permit applications. Such an opportunity exists with the current proposal to develop 52 acres situated between Cooley and Robal Roads east of Highway 20.

A Portland developer, Powell Development LLC and its client, Costco propose building a new Costco superstore, gas station and car wash. They requested more parking spaces than the code allows and fewer bicycles spaces. That is their right under the Bend Development Code. The Planning Commission, although reluctant to approve another big box store, did recognize a legitimate request under the terms of our city's Code.

Given that the Costco business model does not make shopping by bicycle practical, in granting the developer's request, the Council might require measures to mitigate the impacts of such a large development by adhering to the CCAP.

One idea is to incentivize the developer to participate in the Commercial Property Assessed Clean Energy program adopted by the County in 2022. The main building or parking lot would be outfitted with solar panels, the cost of which may be amortized via property taxes over several years. The resulting solar energy production would help offset the heat island effect of this large development.

The developer has added housing to the project. Couldn't the City insist that the apartments be Deed Restricted Housing and thus affordable for service sector workers? Solar panels could also be placed on those units as has been done successfully with the Canal Crossing apartments off of 27th Street.

We thank you for considering our suggestions and wish you all the best in assuming your very important responsibilities as council members.


RE: Another Year, Another Question About Mirror Pond. Opinion, 12/29

Documents obtained from State agencies indicate the century-old Mirror Pond dam is decrepit and in need of frequent repair. Just as it would have been civically insane for the public to fork over millions for a dredging project that would have removed only 17% of the sediment, it would be foolish in the extreme to locate a fish passage at the site of the existing dam. It's been 6 years since the last statistically accurate survey measuring public sentiment for the Mirror Pond impoundment; that one showed robust support for removing the dam. Let's have an up-to-date survey before any decision is made about the future of our urban stretch of the Deschutes River.

Why spend time, effort and money to arrange a fish passage and then begin discussion of removing the dam entirely? Either put in a fish passage or remove the dam. As for funding, Pacific Power should pay to install the fish passage as a condition of the dam remaining.

Fish passage was required at the dam when it was built in 1910. By 1960 it had gone into disrepair and the regulators were told by Pacificorp that they were going to rebuild the dam and put in new passage. It is now over 60 years later and they have done neither.

Groups and agencies have spent millions of dollars improving habitat and flows in the Upper Deschutes. This dam is the only man-made barrier to migrating fish from Lake Billy Chinook to Wickiup dam. One of the engineering proposals calls for passage around the dam that would be viable even if the dam were removed or modified.

Warren Buffet's Berkshire Hathaway, owner of the dam, can certainly afford to correct the problem they have neglected all of these years. No more delays should be tolerated.


Letter of the Week:

Thanks for all the commentary on our Mirror Pond/fish passage editorial. Craig, come on by for your gift card to Palate!

More Letters to the Editor
All Opinion

Roads, Bridges, Water and Broadband Were on the Line. Bentz Voted No. But Why?

Latest in Letters to the Editor