From Sea to Shining Sea... and Back Again

Bend local completes the scouting mission in an effort to establish a national scenic trail that circles the U.S.

Plenty of people hike the Pacific Crest Trail, the Appalachian Trail or any number of other long-haul trails that give them a chance to experience a region and accomplish something big. But imagine essentially combining all the above-named trails—plus plenty more ground—to form a circumnavigation of the United States. The American Perimeter Trail, recently scouted by Bend local Rue McKenrick, a "triple-crown" hiker who's completed the Appalachian, Pacific Crest and Continental Divide trails, "seeks to connect the land, resources, people, and communities. It strives to encourage conservation efforts through recreation, allowing all people and generations to experience the diversity of the contiguous United States," according to its website.

While intrepid hiker McKenrick was unavailable for this interview due to illness, coordinator Leilah Grace took part in this Q&A with the Source Weekly to share more about the American Perimeter Trail. 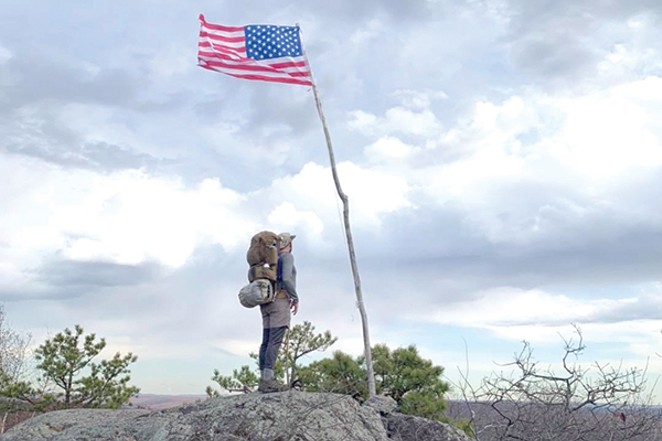 Courtesy American Perimeter Trail/Facebook
The view from the Appalachian Trail in New York in 2021.

Source Weekly: Describe what the American Perimeter Trail is for those not familiar.

Leilah Grace: The American Perimeter Trail is a 14,000 mile trail that loosely traces the perimeter of the contiguous United States of America. We aim to create a conservation corridor that is available for all to use and enjoy and provide areas of wildlife and resource protection. Rue McKenrick spent from July 2019 through Oct. 8, 2022, hiking and designing the initial route.

SW: What was the motivation for this project?

LG: Rue has always wanted to give back to his country and creating this corridor leaves a mark for generations to come.

SW: Describe some of the unexpected things that happened along the trail.

LG: Rue had guns pulled on him in Texas, was detained by police in multiple states, he experienced a host of extreme weather conditions with large snows in Arizona and North Dakota, tornadoes in Ohio, a month of rain going northeast through the Appalachian mountain range. His entire hiking pack was stolen in Kalkasksa, Michigan. He had multiple illnesses, fire-ant bites, a concussion, broken ribs, fractured toe. He was fed and housed by countless people in communities not familiar with hikers.

SW: How did COVID impact the trip?

LG: As Rue approached the Appalachians, Covid hit and spread. The National Scenic Trails were telling everyone to stay home and Rue made the decision to stay off of closed trails and create his own route through the Appalachians. He designed a methodology to keep himself isolated and safe and protect the communities through which he would be passing.

He transitioned from buying supplies in town to living out of a box that was mailed to him every five to six days. The box should contain all the food and supplies he needed for the next week. He sent texts one or two times per day, updating his progress and location and severely limited his phone use since he would have limited opportunities to charge it. At the post office he would retrieve his package, charge his phone and chargers and be on his way. He did his best to avoid people and mostly interacted with the postmaster when picking up his box.

In turn the APT community grew and supported him by purchasing supplies and food off an Amazon wishlist. This carried forward into fueling Rue for the remainder of the trek.

SW: What are some of the toughest physical challenges Rue faced? What about mental challenges?

LG: Rue lost his brother Michael unexpectedly in June 2021 and that was one of toughest challenges he endured. He flew back to Pennsylvania to bury his brother and then returned to North Dakota to continue hiking.

SW: What about down time? How was that spent?

LG: Rue did not take rest days during the scouting hike unless absolutely necessary and these were usually due to illnesses or injury. These days could be spent in his tent, a hotel room, or at a stranger's home. He stayed with me twice for illness and injury. During these times he rested, repaired gear, made phone calls, sought medical attention if necessary and prepared to go back on trail.

Rue was forced off trail in October 2020 due to illness and weather, where he returned home to Bend for six months. The conference (nonprofit) was founded then, the community built more, and fundraising commenced to fund the final leg of the trip.

In May 2021 he set out to finish the final 3,000 miles of the trail. On this segment he lost his brother, returned home and then back to the trail. He had to return to Bend in September 2021 due to illness again. There he continued working on the conference, fundraising and mapping the official route of the trail.

July 2022 he left to complete the final miles of the loop, encountered multiple illnesses and injury forcing him to Bend once more for two weeks to rest and heal.

SW: What's next for the APT and for you?

LG: The conference becomes the focus as a conservation organization, growing our membership, finalizing the official route which will be different than the route that Rue hiked, and working with local organizations to protect land and resources along the route. Our goal is to become a national scenic trail, which requires an act of Congress.