It's Viola Davis' World | The Source Weekly - Bend, Oregon
Support local and vocal journalism! Become a Source Insider to help get news and culture to Central Oregon.
Become a supporter Support Us

I know this is incredibly obvious, but most movies are full of crap. If it's not a documentary, it's definitely full of crap, and if it says, "Based on a true story," it's usually just as full of crap as the rest. Look at "The Conjuring" franchise. There's more evidence that the Warrens were snake oil salespeople than that they were investigating real hauntings. Hollywood likes to take a kernel of a true story like a historical event or figure and then fabricate a (sometimes) compelling narrative to transform into box-office dollars. 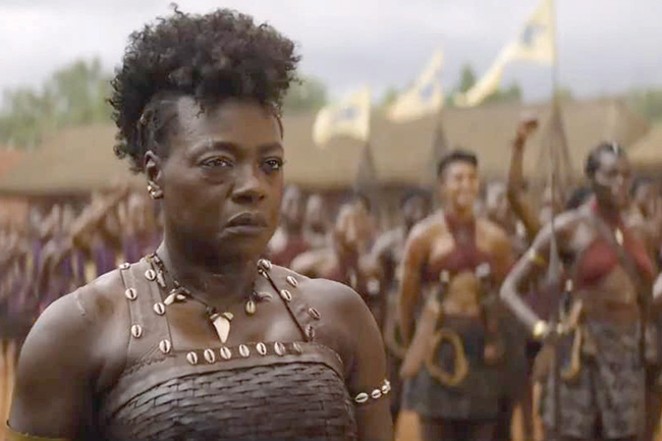 Courtesy of IMdb
The real life Agojie, an all-female warrior military group, could have conquered the world if they wanted to.

Here's the thing, though: Your mileage may vary, whether that bothers you or not. I don't usually go to movies for historical accuracy (that's what I like books and docs for), so I usually take everything presented in "historical" films with a boulder of salt. If movies playing fast and loose with the facts make you angry, then I might avoid the new historical action/drama, "The Woman King," but if you use the film as a jumping off point for doing your own reading on the subject, then it's a very entertaining epic bolstered by three astounding lead performances.

"The Woman King" tells the story of the Agojie, the all-female warrior military group that protected the West African Kingdom of Dahomey. Set in the 1820s, the film follows the leader of the Agojie, General Nanisca (a seismic Viola Davis), her second-in-command, Izogie (a scene-stealing Lashana Lynch) and a new recruit to the unit, Nawi (a star-making performance from Thuso Mbedu). These three performances are so compelling that even when the film veers into melodrama, it never ceases to be immanently watchable.

The story of the Agojie and of the long-ended Kingdom of Dahomey is a fascinating one and definitely worthy of making a big-budget historical epic about, but, because Hollywood, what we have in "The Woman King" is a sanitized and bloodless drama that trades complicated history for crowd-pleasing adventure. Don't get me wrong, I enjoyed the film immensely as I was watching it, but once I went home and researched Dahomey and its history with slavery and human sacrifice, it made me wonder if something more historically accurate would have ultimately carried more power.

But ignoring all that and just viewing the movie for what it is and not what it could have been, "The Woman King" is a strong look at Black sisterhood, the majesty of Africa and the destitution of slavery. This is "Braveheart" and "Gladiator" writ even larger with an almost exclusively BIPOC cast which is something we've needed for a long time. It's hard to nitpick the details of this movie when it's ultimately so refreshing that Hollywood is finally making movies like this after so many years of almost zero representation.

At the end of the day, it's extremely satisfying to watch African warrior women systematically slaughter colonizers and slavers, so all of my complaints of historical accuracy fall by the wayside when 57-year-old Viola Davis fights men twice her size and half her age and pulls it off more believably than most other actors. I mean, I buy Viola Davis as an action star now more than Chris Pratt or Vin Diesel.

"The Woman King" is an extremely entertaining bit of popcorn historical action. It could have been much more, but this is what we have, and since it's kind of amazing we even have this, it's good enough for now. But Hollywood can still do better. They owe it to the underrepresented and marginalized voices they've silenced for over 100 years. Movies like this and "Black Panther" are a good place to start, but this is just the beginning.