One Shell of a Movie | The Source Weekly - Bend, Oregon
Support local and vocal journalism! Become a Source Insider to help get news and culture to Central Oregon.
Become a supporter Support Us

One Shell of a Movie

"Marcel the Shell with Shoes On" is perfect

I get that I'm a giant softie whose heart is made of marshmallows and love songs, but the first time I watched "Marcel the Shell with Shoes On" I cried four separate times across the brief 90-minute run time. Normally, I love me a good cry, but I was working at Tin Pan Theater at the time, and trying not to blow snot bubbles in front of 30 strangers while popping popcorn is a level of multi-tasking I was not prepared for.

"Marcel" started as a YouTube trilogy of shorts, released between 2010 and 2014. Directed by Dean Fleischer-Camp and voiced by American treasure Jenny Slate, the shorts were viral sensations that one could cynically assume couldn't carry the foundation of an entire feature film. However, not only is the theatrical debut of Marcel a fantastic movie, but it's a stronger piece of filmmaking than all three shorts combined. 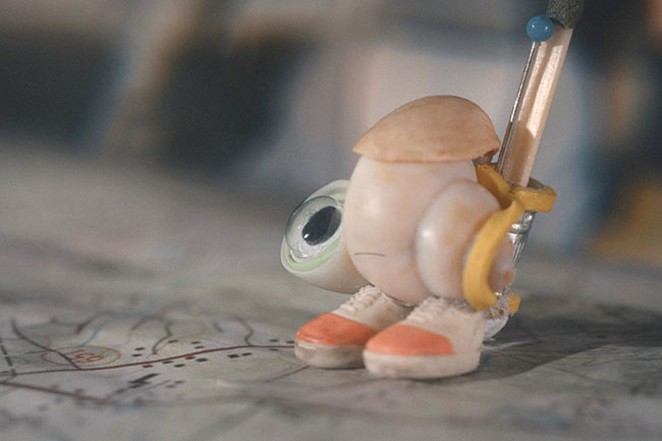 Courtesy IMdb
Marcel proves he can be ready for anything.

Yes, "Marcel the Shell with Shoes On" sounds like a ridiculous kids movie that parents might assume they would be suffering through for family movie night, but even though Marcel himself is an anthropomorphic, stop-motion animated talking shell, the movie is grounded in very human emotions. As one could expect from production house A24, there's a deep melancholy to the film that will absolutely wreck adults, but Marcel is cute and funny enough to keep kids from wondering why the cartoon they're watching is so somber.

Marcel is living in an Airbnb with his grandmother Connie, who is slowly succumbing to dementia. They've been alone in the house since the previous owners, a married couple, split up and accidentally took the rest of Marcel and Connie's extended family away in a suitcase. Marcel struggles every day to figure out how to provide for himself and Connie, while dropping constantly beautiful philosophical nuggets and keeping his Gran entertained.

Enter Dean (played by director Dean Fleischer-Camp), a filmmaker who starts documenting Marcel and Connie's day-to-day life. The entire movie is basically these beautifully observed moments of human existence seen through the eyes of tiny non-human creatures. Marcel says things so simple and so profound that I found myself constantly in awe of the script by Fleischer-Camp, Slate and Nick Paley.

I might have made the movie sound depressing, but it's actually incredibly life-affirming while constantly reminding us to never forget the sweetness inside of the bittersweet. It's an actual perfect film. The conversations parents will have with their kids on the drive home from the movie theater will be life changing, as "Marcel" never talks down to the children in the audience, instead treating them like people who are capable of growth and the exploration of ideas.

I won't ever forget "Marcel" and I doubt anyone who watches the movie will, either. In fact, I wouldn't mind adopting his philosophy of life from here on out: To seek adventure, to cherish the ephemeral, to be good to myself and others, and if I can, to protect the good that exists in each day. It doesn't sound easy, but if Marcel can do it, then so can we.

Marcel the Shell with Shoes On