Shell Games | The Source Weekly - Bend, Oregon
Support local and vocal journalism! Become a Source Insider to help get news and culture to Central Oregon.
Become a supporter Support Us

'Glass Onion: A Knives Out Mystery' reveals its layers

There's something that makes me feel a little like I'm chewing sour grapes when I sit down to pick apart a movie that ultimately exists just to wildly entertain people. Like, there's nothing inherently "bad" about the movie or that makes it a lesser exercise in cinema, but ultimately feels like the popcorn we munch while watching it: empty with little to no nutritional value. Which (because the pandemic taught me how to keep myself occupied by creating pointless thought exercises in my head) makes me wonder if a movie has the responsibility to be more than that. 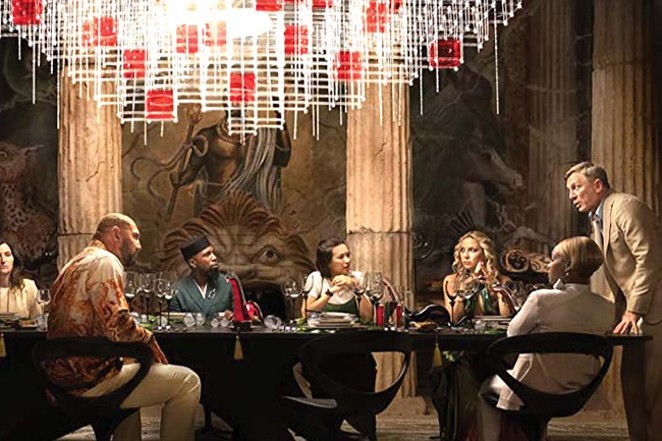 A case in point is "Glass Onion: A Knives Out Mystery," a movie that held me in its palms for basically all of its 139-minute runtime, but basically only exists as a delivery device to show an audience how clever writer/director Rian Johnson is at plotting and jokes. The first "Knives Out" felt like a breath of fresh air at the time because we don't get old-fashioned murder mysteries packed with movie stars with massive budgets that often anymore, plus it was a super-fun throwback to films like "Clue," "Murder By Death" and "Murder on the Orient Express."

"Glass Onion" doesn't have the element of surprise working for it this time, but what it does have is a stacked cast, a breathtaking new location and an engaging central whodunnit. With Kathryn Hahn, Kate Hudson, Dave Bautista, Leslie Odom Jr., Madelyn Cline and a scene-stealing Jessica Henwick supporting, and with Edward Norton, Janelle Monae and Daniel Craig front and center, there isn't a weak link in the bunch.

Without giving too much away, the setup is delicious: Norton is a tech billionaire who invites a group of his oldest friends to his private island to participate in a scripted murder mystery. World's greatest detective Benoit Blanc (Daniel Craig, having an absolute blast) also arrives on the island just in time to make use of his skills of deduction to solve a very real crime. Hijinks ensue.

Filmed on the sumptuous island of Spetses in Greece, "Glass Onion" is visually much more exciting than the Boston mansion from the original, but even with such a gorgeous new locale and that excellent cast, not enough time is spent developing the characters to really invest the audience in their fate. Janelle Monae has the juiciest role of the new cast members by far, but even her role feels like it's in service of the mystery, rather than the other way around. The plot should always serve the characters because that's how you find truth in storytelling.

Everything in "Glass Onion" is bigger than in "Knives Out." Even the script is structurally much more daring than the original, though it's constructing a mystery that I didn't find anywhere near as enveloping. Every single line of dialogue and every action taken by a character is in service of a shell game meticulously designed by Rian Johnson, but, just like most shell games, it's primarily designed to trick you and leave you with nothing. Halfway through the film, I started thinking about the suspects from "Knives Out:" Don Johnson, Michael Shannon, Jamie Lee Curtis, Chris Evans, Katherine Langford Jaeden Martell and Ana de Armas were precisely detailed and drawn characters. The suspects in "Glass Onion" are caricatures (aside from maybe Janelle Monae) and by the third act I couldn't care less about how their stories turned out.

Still, this is all picking at a movie that's actually extremely fun to watch as you study Benoit Blanc proving why he's the world's greatest detective. Even though I wasn't as in love with "Glass Onion" as I was with "Knives Out," I would gladly watch Daniel Craig chew up the scenery a dozen more times as Blanc. Maybe that's all the movie set out to do: just entertain me enough to come back next time. Maybe that's enough sometimes, even as I dream for something more.