In February, when executive chef and part owner of 5 Fusion, Joe Kim, read the James Beard Foundation's 20 nominees for the Best Chef in the Northwest, he did a quadruple take at his own name.

"It's a big deal, because you don't do anything for it. You don't ask for it. They find you," explained Kim, a Central Oregon native who this summer took over part ownership of the swank downtown sushi and so-much-more eatery. "Deep down, every chef wants that recognition, no matter how much they want to stay lowkey or hide in Bend and cook the food they want to cook. It makes me happy for everyone else, the other cooks here. They worked just as hard for it."

Considered the Oscars of the food world, a nomination is an extremely impressive honor.

But Kim isn't letting the accolade go to his head. He is constantly learning and encouraging his kitchen staff to do the same, going so far as to take the entire crew on a trip to the famed French Laundry in Yountville, Calif.

"That restaurant means a lot to me. Thomas Keller (the chef) is one of the people who inspires me. If you look closely, you'll see a lot of him in my cooking," explained Kim, who worked at the French Laundry before he moved back to Bend. "I wanted them [5 Fusion's staff] to see that, because it inspired me so much. It's a life-changing thing."

Kim also recently returned from Chicago, where he worked with Chef Grant Achatz of Alinea, a restaurant recently voted the sixth best in the world by the prestigious Michelin Guide.

"It is the most intense kitchen I've ever been in," said Kim. "It pushes you. No matter how good you are, you're never good enough. My father was born in Japan, and that's the mentality. Every day you work harder to be better at what you do. There's no such thing as perfection." 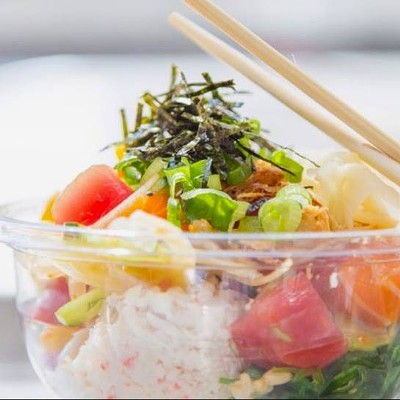 Where do people rideshare #inBend?