Imagine if Cannabis Farms Operated Like Other U-Pick Farms | The Source Weekly - Bend, Oregon
Our journalism makes a difference, and so can you. Become an Insider and support The Source Weekly!
Find out how Support Us

Unlike the idiomatic disinterest in seeing how sausage is made, many of us truly love seeing how stuff we love gets made. In Bend the Deschutes Brewery welcomes nearly a million guests annually, who sip Fresh Squeezed IPA in front of the mash tun. The Tillamook Creamery ushers in some 1.3 million visitors who not only watch the ice cream-making process, but don't leave without sampling, say, freshly-made Marionberry Pie ice cream. Alas, while winery and distillery tours are commonplace, and a trip to a nearby orchard for a day of U-Pick fruit harvesting is a cherished tradition, visits to cannabis farms remain verboten.

Who among us who's 420-friendly wouldn't kill (a veggie wrap) for a day of U-pick herb?

There's no legislation stalled in the halls of Salem that would permit marijuana growers to sell directly to consumers or even allow them to visit the farms (or warehouses) where they grow the devil's lettuce. But that hasn't deterred Alex Eakin, the founder of White Wolf Cannabis, who bears a striking resemblance to Brian Austin Green, from planning to build a landing pad for eventual visitors. White Wolf, established in 2016, operates a vertical growing operation on a rustic, inviting plot of land in Tumalo. Eakin can't wait for the day he and his growing partner can welcome cannatourists to the same type of experience that other agriculture warriors soak up freely.

Oregon craft beer drinkers discern their lime'n'lychee-throwing Citra hops from their passion fruit'n'pineapple inducing Simcoe hops through sample flights. Coffee connoisseurs learn their fruity, floral Ethiopian Yirgacheffe from their earthy, smoky Guatamalan Antigua through cuppings. The only way to discover that terroir, coupled with one's personal preferences, is to sample as many varieties as possible. That's the allure of variety-packs of single-origin chocolates.

There are afficionados on both sides of the dispensary counters, but budding flower fans would get to survey a bouquet of strains, experiencing the nuances in flavors, and effects. Visits to these funny farms could reverse canna's commoditization and optimally present the agricultural jewel by elevating consumer education and appreciation.

Thanks to golden-ticket press credentials, I now have a better understanding of the process pakalolo undergoes from farm to fatty (all without so much as a puff so I avoided a psychoactive fate like Willy Wonka's chocolate factory's sightseers met). While there are mitigating risks to the plants becoming infested or infected by visitors—especially ones who may have just come from another farm, many cannafarmers would relish the opportunity to usher in fans. 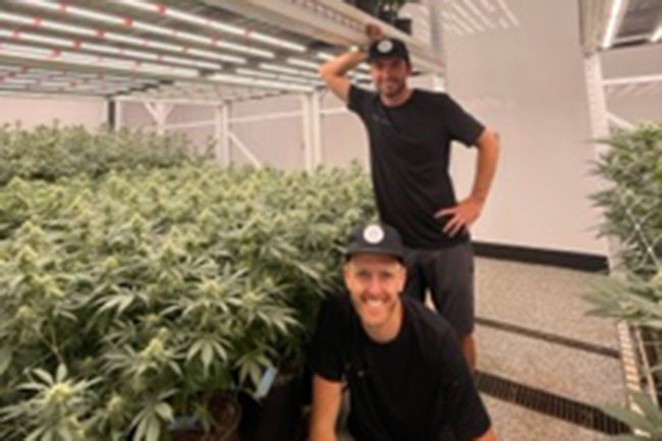 "You'd have Plexiglass where I can show people the different stages of growing and fertigation," says Eakin, thus teaching me the term for simultaneous fertilization and irrigation. The entire process takes as little as four weeks when resulting from the more prevalent indoor growing operations. Surprisingly, the room for young roots, manipulated by spring-like lighting and temperature, was staid and scentless, but the adjacent room that replicates autumn smelled like a mermaid skunk yoga studio. And the intense white LEDs gave it a celestial glow like getting to go to heaven without the bummer of dying.

"These are the trichomes that grow these little pistils that grow up and once they start to turn milky or even light brown, or that golden color, that's when the THC is reaching its maximum," Eakin points out of the later stage of cultivation. Seeing it with my own eyes—and nose—instantly gave me a deeper understanding of what it takes for product to reach my favorite dispensary. Although kushy jars were plentiful, I'm enamored by White Wolf's idea to offer a less processed, more-resinous, trichrome-rich grower's cut. Perhaps that'll be a farm store exclusive if the law allows.

In addition to a forthcoming welcome center, Alex showed me around the farm including a gorgeous 40-foot table in one of his greenhouses where he hopes to host dinners like Outstanding in the Fields, but more like Far Out, Man, in the Fields. And unlike brewery or winery tasting rooms where visitors get the boot at closing time, Alex hopes to rent tiny houses on the ranch for guests to sleep. And wake'n'bake like never before.

Speaking of The Boot