Fire on the Mountain Heading to Bend | The Source Weekly - Bend, Oregon
Support local and vocal journalism! Become a Source Insider to help get news and culture to Central Oregon.
Become a supporter Support Us

Fire on the Mountain Heading to Bend

The Campfire Hotel in Bend will soon see another restaurant added to its roster, when Fire on the Mountain opens in the former auto dealership building on the southeast corner of the Campfire property. Fire on the Mountain and Campfire announced the addition of the popular Portland-area wings place this month, with a projected opening spring or early summer.

Andrea Morris – Apis Photography
With in-house beers and a menu of 12+ wing sauces, Fire on the Mountain has been a favorite in Portland since 2005. Now Bendites get to sample the goods at its new location later this year.

The original Fire on the Mountain has been a beloved haunt for Portlanders since 2005, when Sara Sawicki and Jordan Busch opened the first location along North Interstate Avenue. Locations now include two more Portland spots, on East Burnside and NE Fremont, as well as two locations in Denver, Colorado.

"FOTM sources its wings from cage-free, antibiotic-free, hormone-free, and humanely raised chicken. The restaurant also uses all-natural beef and pork that are both humanely and sustainably raised," described a press release.

Fire on the Mountain – which also serves beer brewed by its own brewers — will be the latest addition to the hotel's food and beverage offerings, which also include the Canteen Bar, run by the people behind Dogwood Cocktail Cabin, as well as the recently opened Juice Easy Café, the concept created by "master juiceologist" Bobby Humbert. Juice Easy's menu includes fresh juices and smoothies, as well as "breakfast burgers" and a chicken and waffle bowl.

The area of Third Street between Franklin and Greenwood is looking pretty Portland-y these days, with two recent additions of Portland-based businesses—including SuperDeluxe and the Campfire—added in recent years. That's on top of the Portland-based Laughing Planet, also located on the same block-ish. 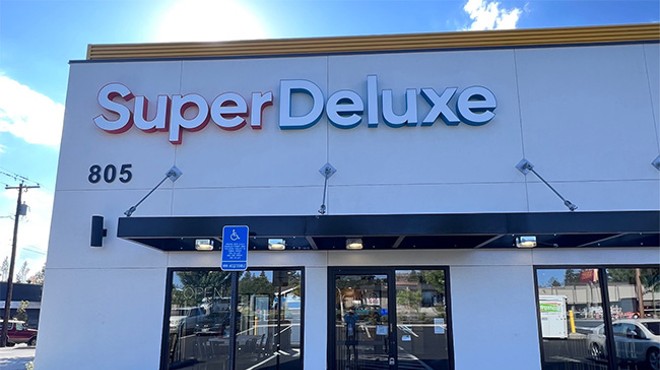 Bend Gets SuperDeluxe #4: A Portland chain expands to Bend

Midtown Rising ▶ [With Video]: With Bend's "Zoom Town" status and its ongoing population boom, its scene needed room to grow. Enter Midtown, rising slowly but surely—and with a vision