Aiming for a Carbon-Neutral Future

By Poppy Smith and Nicole Vulcan

Central Oregon Community College joined some 443 other colleges and universities around the nation last month, when President Laurie Chesley signed a "carbon commitment" pledge aimed at reducing greenhouse gas emissions and achieving carbon neutrality at the college. We checked in with COCC Sustainability Coordinator Noelle Copley about what that means for the college.

The interview has been lightly edited for clarity. 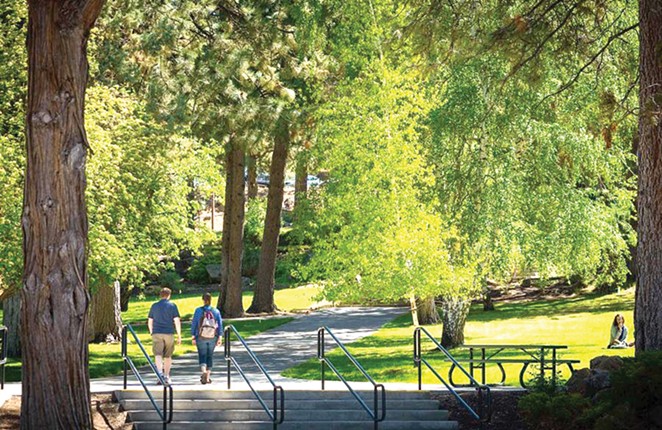 Courtesy Central Oregon Community College
The first item on the agenda as part of COCC’s carbon commitment pledge: Doing an inventory of the college’s greenhouse gas emissions – including the impact of single-occupancy vehicles driving to campuses.

Noelle Copley: What the president has signed onto is a program created by an organization called Second Nature. It's called the climate leadership network and the commitment we've signed onto is a starting point. It entails that we do a greenhouse gas emissions inventory in the next year. So, that'll be picking up and starting and in the second year we'll do a climate action plan with the ultimate goal of carbon neutrality.

SW: What does it mean to be carbon neutral?

NC: Really, the goal will be to get our operations much more efficient and turn to renewables like solar energy and production of our own when we can. We have a lot of old buildings (the college was founded in 1949) so we have some older infrastructure. It really means getting the operations efficient and then looking for renewable sources of energy when we can.

SW: Will efforts be aimed specifically toward the campus itself or will they include student participation?

NC: We are a commuter college, so we have to calculate the emissions of people getting to campus. We only have 300 students who live on campus and the rest have to commute to one of our campuses every day. When we do the greenhouse gas emission inventory it's just accounting for the emissions we're responsible for — single-occupancy vehicles. We have to account for this so that we can put together programs that would incentivize getting single-occupancy vehicles off the road.

SW: What can COCC learn from other universities that have already reached carbon neutrality?

NC: We'll definitely be looking at colleges of similar size. Some colleges may be larger and have their own power generation plants. We'll be able to look to our colleagues as examples. In the climate leadership network, they have three different levels of commitment. Some universities have been at this for 15 or more years and they started out with the same commitment that we've done and then they moved into adding resiliency, which means acknowledging that climate change IS happening and what're we going to do to be flexible and evolve with it. The resiliency aspect means incorporating things like emergency planning for detrimental weather events within our area. There are also schools that have done things with solar production with battery backups capable of being sufficient for a few days.

SW: What kind of public engagement does this include?

NC: We'll be having an event that we're starting to plan for April 19. Last year we did it, and it's part of a global initiative that's put on by Bard College (Editor's note: The print edition of this story said it was put on by "our university" — that was a typographical error.) Last year it went on at over 400 sites around the world. We put on a climate teaching event, which we'll be doing again. We will be partnering with the City of Bend, The Environmental Center and hopefully the Bend-LaPine School District as well in order to make it a community-oriented event. The idea is that faculty will speak on climate change from their discipline.

We also have a fun event for Earth Day, which we did last year, too. This will be our second annual sustainable fashion show. This event is a partnership between COCC and OSU-Cascades, where we have a free store that students can go and shop at. The shop is a resource for students as they're entering the working world to have more professional wear. This topic of environmental advocacy has just evolved and grown, and sustainable fashion is a real area that makes a difference.

Sustainable fashion can help to lessen the number of textiles that go into the landfill every year and combat issues with fast fashion, which are clothes marketed cheaply to the consumers but that have detrimental amounts of water use and energy use.