The Stepping Stone Shelter is opening up in February, allowing Shepherd's House to use the Rainbow Inn for temporary sheltering

On Jan. 18 the Bend City Council approved an agreement with NeighborImpact, an antipoverty nonprofit in Central Oregon, to fund the Stepping Stone Shelter. The City will pay the nonprofit $2.6 million to operate the shelter for three years with funds received through the American Rescue Plan Act. The shelter is one of 19 motels converted to houseless shelters by Project Turnkey, a $65 million initiative from the Oregon legislature that's led to the creation of over 900 shelter beds, a 20% increase statewide. 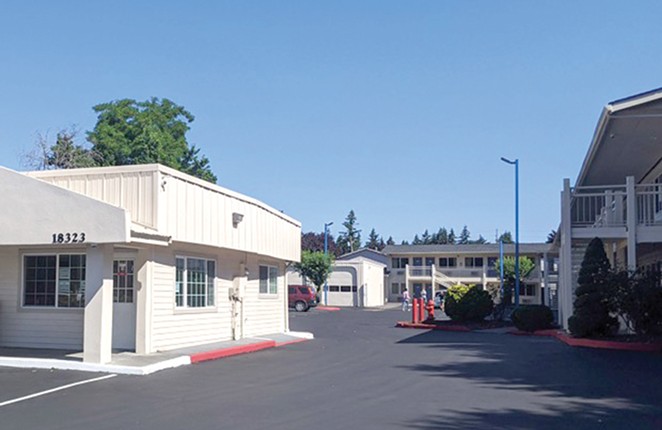 Courtesy Oregon Community Foundation
The Bend Value Inn’s 28 rooms could house up to 60 people once it comes online in February.

The City purchased the former Bend Value Inn in July 2021 with $2.97 million in funding from Project Turnkey and started accepting overnight residents the following January. Those residents were transferred to the former Rainbow Motel in May so renovations could be done on what's now the Stepping Stone Shelter. The renovations are expected to be completed in February and the newly available beds gets the City closer to its goal of providing more shelter beds for the nearly 800 unsheltered people living in Bend, according to the 2022 Point in Time Count.

"There is a Council goal of 500 shelter beds and there are 28 units in this Stepping Stone Shelter. Those 28 units are set up with a variety of floor plans that may have a family in one unit, and then in one of the smaller units they may have a single individual," said Amy Fraley, houseless service manager for the City of Bend. "That gets us to 422 shelter beds in town."

At capacity Stepping Stone could house 60 people who can stay for 30 to 90 days before they'd ideally move on to more long-term housing. NeighborImpact Director of Housing Stabilization Molly Heiss said half of the 24 people who've gone through the program thus far moved into more stable housing after their time in the program. During exit interviews, four people said they are moving back outside, one is in the hospital and six people either refused or didn't complete exit interviews. Heiss said there's room to improve, but it's a promising statistic, considering it's a low-barrier shelter.

"Our intent is to get them working on a housing plan as soon as possible," Heiss said. "We're not a housing option, we're an emergency shelter, so we bring people in off the street, get them stabilized and talking about options and next steps. If they're actively engaged with that, then we can extend their stay in 30 day increments up to 90 days."

Low-barrier shelters don't require criminal background checks, credit checks, program participation or sobriety as terms of stay. The Shepherd's House Lighthouse Navigation Center is the only other low-barrier shelter in Bend and can host about 100 people in a large congregate space. Stepping Stone will have rules for conduct while at the shelter, and can choose to end someone's residency if those rules are violated.

"Guest agreement is an expectation of no violence, no weapons, no drugs or alcohol on site nor used on site, general courteousness to staff and to each other, no smoking or open flames in the rooms. Things like that that are just basic safety rules," Heiss said.

NeighborImpact contracted REACH Out Central Oregon to perform case management at its shelter, and Family Kitchen is providing one meal a day to residents. At least one NeighborImpact staffer will be on site at all times and will do daily welfare checks, connect tenants to resources and provide basic household necessities if needed.

Applicants are screened through Central Oregon's Coordinated Entry System, which assesses unhoused individuals' needs and connects them with housing resources and service providers. The assessment asks respondents about their health, the conditions they live in and what they'd need to transition out of houselessness.

"That assessment is meant to measure vulnerability based on their unhoused circumstances," Heiss said. "When we have vacancies, we will select from the coordinated entry list based on vulnerability. We're trying to house the more vulnerable folks."

Shepherd's House Ministries will begin operating the Rainbow Motel a few weeks after it's vacated to house people that'll be displaced once they begin renovating the Lighthouse Navigation Center. The organization is hoping to house about 40 people in the motel's 22 rooms while it installs a kitchen, showers and laundry facilities in the Lighthouse. While construction occurs, the navigation center will cut capacity in half to about 50 guests and will only house people overnight. Daytime services will be moved to the Rainbow Motel, but it's not certain what will happen to the motel once renovations are completed.

Jack Harvel
The City bought the Rainbow Motel with general funds, allowing it to use it however it wants. In the meantime it’ll be used as low-barrier shelter for some of Bend’s nearly 800 unhoused residents.

"I don't know what will happen after that; it's possible if the demand for shelter space is great enough that that facility could be used further. We're not really sure where we are in the scheme of that yet," said John Lodise, director of emergency services at Shepherd's House.

The Rainbow Motel will remain a low-barrier shelter under Shepherd's House, and like the Stepping Stone it will prioritize the vulnerable populations currently staying at the navigation center. Lodise said families, people with medical troubles and the people who are engaging in services will be prioritized to stay at the Rainbow Motel. Unlike Stepping Stone, there won't be a time limitation on the length of stay for people at the Rainbow Motel once Shepherd's House takes over.

"I think for the most part, we're looking to put people in those rooms continuously, until either they move on, or there's a reason that we need to put other people in the rooms," Lodise said.

Jack is originally from Kansas City, Missouri and has been making his way west since graduating from the University of Missouri, working a year and a half in Northeast Colorado before moving to Bend in the Spring of 2021. When not reporting he’s either playing folk songs (poorly) or grand strategy video games,...