Can Its Salmon Population Wait Out the Bureacracy

Green algae blobs choke handmade gill nets that should be filled with salmon. The Klamath River is warming, heated by drought and dams, and that allows the algae to thrive, making it harder and harder to catch fish. Some days, Yurok tribal members capture nothing but green goop.

And some algae is toxic; one microscopic blue-green variety has made the water hazardous to the public. Warming conditions have also encouraged the spread of Ceratonova shasta, which infected 97% of juvenile salmon in the Klamath last spring, killing 70%. The crisis extends to the communities that depend on the fish for sustenance.

Paul Wilson
Still considered clean energy by most of the world, the water behind Iron Gate Dam is rich with toxic algae, a strong producer of methane emissions. Without measure of methane in our greenhouse gas(GHG) emission reports, the United States has used hydroelectricity as a false climate solution, ignoring the atmosphere warming effects that these reservoirs have.

Finally, after two decades of paperwork, the dams are scheduled for demolition in 2023. Now it's a race between the opaque machinations of the Federal Energy Regulatory Commission, or FERC, in the East, and C. shasta on the West Coast.

Before the California Oregon Power Company Dam split the Klamath Basin in 1918, anadromous chinook and coho salmon and species like Pacific lamprey could reach the upper tributaries to spawn and die, enriching the ecosystem with omega fatty acids and other marine-derived nutrients. The nutrient-rich sediments ultimately returned to the ocean.

Later, COPCO built a companion dam, COPCO 2, and then the John C. Boyle Dam and the Iron Gate Dam, the lowest on the Klamath River. COPCO evolved into PacifiCorp, and both PacifiCorp and the dams are now owned by Warren Buffet's company, Berkshire Hathaway. Two other dams on the upper Klamath, the Keno and the Link River, are not slated for removal, in part because they have fish ladders and provide irrigation for farms.

The four lower dams confine the salmon to the basin's lower half and keep sediment in the upper half. "If you look at the river below Iron Gate Dam, it is sediment-starved," said Mike Belchik, the Yurok Tribe's senior water policy analyst. The result is an "armored bed condition," perfect for annelid worm colonies. "It turns out that these worms are secondary hosts for this fish disease."

The four dams provide no irrigation and are unconnected to the upper Klamath's irrigation crisis. They only produce hydroelectric power. But new wind farms more than offset the amount of power the dams currently generate, enough to power 70,000 homes, so their removal will not affect the grid. 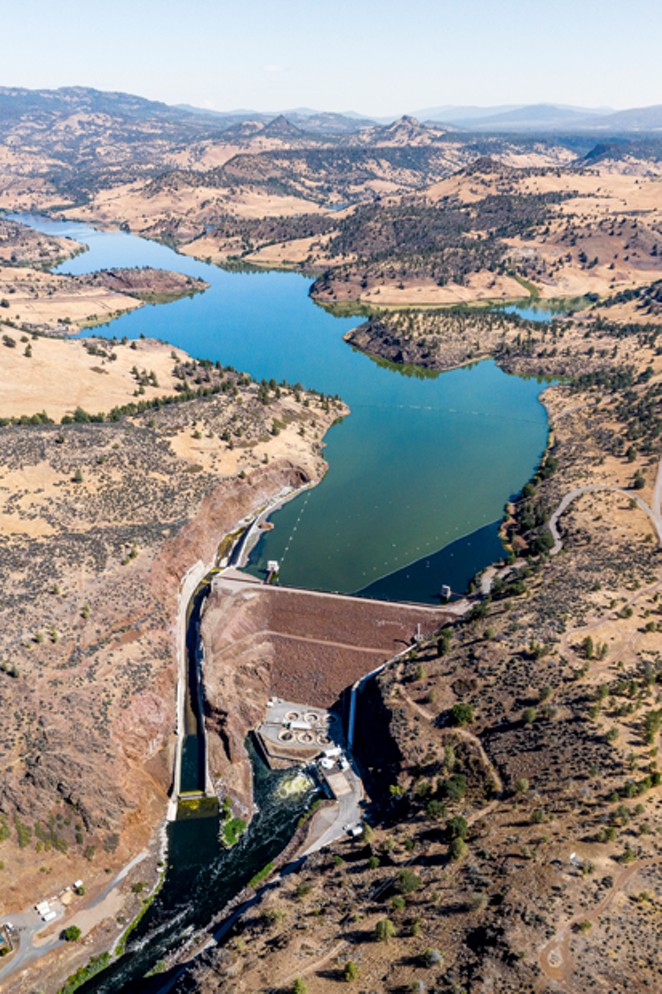 Paul Wilson
Water of the Iron Gate Reservoir full with a toxic algae bloom, created by stagnated and heated waters. Communities along the Klamath River receive annual notices to stay out of the river during summer months because of the public health hazards the bright green water poses for people and animals alike.

The push for removal began in 2001, when the George W. Bush administration diverted so much water for irrigation that it sparked the largest fish kill in Northwest history. PacifiCorp's dam licenses were up for renewal, and Tucker saw it as the perfect time to reassess whether the dams were serving the public interest. At first, Belchik said, their suggestions for removal weren't taken seriously. But the Yurok and Karuk persisted, along with partners and allies, hoping for a 2010 removal date. When PacifiCorp realized updating the dams for environmental compliance would be more expensive than removing them, the company agreed to talk. The first agreement set a target removal date of 2015. That date slipped to 2020. Bureaucratic delays pushed it to 2021, then 2022, and now to 2023. If it slips again, it could be too late.

The dams' titles first need to be transferred to new owners and then surrendered before removal can begin, and both processes require FERC's approval. In June, FERC approved title transfer from PacifiCorp to the Klamath River Renewal Corporation, a nonprofit specifically created for removing the dams. It's a big step forward, but not home plate.

"We have turned all of our attention now to the surrender proceeding," said Mark Bransom, CEO of KRRC. But the surrender application must be approved before removal can begin, and FERC has no guaranteed timeline.

FERC has scheduled the completion of its environmental impact statement for September 2022. That's not soon enough for the 2023 timeline, Bransom said; it would delay removal for another year. Still, Bransom remains hopeful that FERC will be on an expedited schedule. FERC did not respond to repeated requests for comment.

Dismantling will happen in stages. First, the reservoirs will be drained down to existing riverbeds, discharging the 5 million to 20 million cubic yards of sediment that has been trapped behind the dams for 100 years. Because sediment can smother salmon eggs and even suffocate juveniles, removal has to be done in the winter, after the fall runs and before the spring out-migration of fry.

In May or June, once the risk of significant flooding has passed, the concrete dams—COPCO 1 and 2, and part of J.C. Boyle—will be drilled and packed with controlled explosives to break them into removable chunks. Iron Gate is a clay-core earthen dam, so its material will be returned to the nearby "borrow site" to fill the crater from which it came. The newly exposed reservoir beds will then be stabilized with native trees, shrubs and grasses; a Yurok seed collection crew has been gathering and germinating seeds for two years in preparation.

By the end of December, in whatever year this finally ends up happening, the salmon should be returning. Jason Jackson, the Hoopa Valley Tribe's administrative assistant to the chairman, is hopeful, but skeptical about the timeline. "In 2023, the Klamath will be free," he said, adding, "but we'll see."

But this story is not just about the fish. Restoring salmon, Jackson explained, is a way of caring for elders and youth. "It reduces the risk of diabetes, high blood pressure. It's brain development food for our youth."

"We don't manage for just the next generation, but the next seven generations," Jackson added.

Yurok tribal member Tenayah Norris, who is raising two babies in a small community about 60 miles inland, said she relies on the relationship with the river: "We share emotions." The Yurok officially recognized the personhood of the Klamath in 2019. Norris said it's hard seeing the current conditions. "We still check it out, say hi," she said. "We're helping these places when we go there and show it love and clean it up."

Paul Wilson
Iron Gate Dam is one of the four dams along the Klamath River scheduled for demolition by 2023.

The Yurok Reservation is a food desert, without any kind of supermarket, McCovey said, so "to be able to go into your backyard and catch one of the finest protein sources that exists in the world is pretty special."

The tribe needs 11,000 fish, minimum, to feed its people. This year, they'll get only about 6,500. "We're keeping the fish on life support," said McCovey. "One of the main things we can do is get those dams out and open up 400 more miles of spawning habitat."

McCovey believes there will still be fish in 2023. "Salmon are extremely resilient. They've been through a lot, and they're a lot stronger than we think." The current juvenile run is over, but with temperatures rising and the dams still in place, the salmon remain under threat.

Belchik agreed that they won't disappear overnight. "If you start getting below too low a number of returning fish, individual tributaries will start winking out. It's not that we'll lose every salmon in the entire basin all at once." But the situation is dire. "If we have one more event, then we're really screwed here."

"If we keep putting in this effort," said McCovey, "the fish will see all we're putting into it, and they'll see the love that we have."

Salmon get attention because they're iconic. "If we say we're fixing this river for lamprey, no one's going to listen," McCovey laughed. "It's just another way that the salmon are helping us. They've kept us alive since the beginning of time, and now here they are helping us again, restoring an entire ecosystem because we're using their good name to get our message out there."

He said the fish won't remember the upper tributaries, but they're evolutionarily programmed to find their way up them anyhow. Salmon usually spawn where they were born, but about 5% wander into nearby waterways instead. It's how they repopulate rivers after other disasters, like volcano eruptions. McCovey has faith in that 5% to come through and restore the salmon population. "They never fail us," he said.

"Everything is interconnected," McCovey added. "We know this. And when you put a dam in a river, you block that connection." The dam's less-studied impacts ripple out at least as far as the orca, who also depend on salmon. Before European contact, McCovey said, the tribal people of the basin worked to maintain balance. "And now we're working on restoring balance." Someday, he hopes, they'll get back to maintaining balance again. "We're always going to be working towards that."

—Brian Oaster (they/them) is an editorial intern at High Country News and a member of the Choctaw Nation of Oklahoma. They are an award-winning investigative journalist living in the Pacific Northwest.