One year after its opening, Redmond's Homestead pump track is as popular as ever

If you've been reading the Source Weekly a while, you might recall our ongoing 20/40/60 segment, in which people of three different ages (20ish, 40ish and 60ish) try out a new activity in Central Oregon. But since Redmond's pump track is such a draw for kids, we couldn't go with that typical format; instead of adults, we had to gain insight from local kid riders. 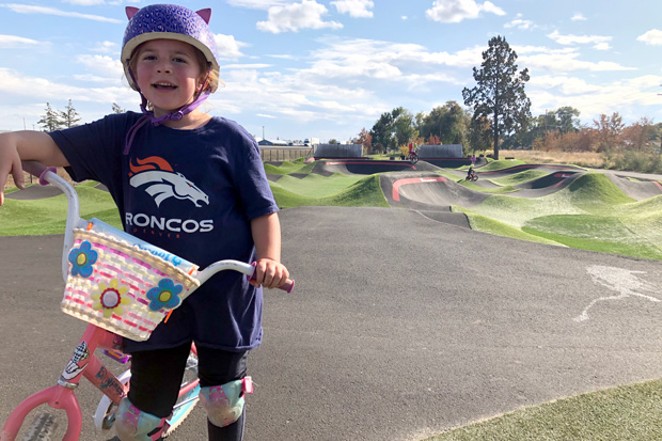 Nicole Vulcan
Miles, a first grader, was asking to go back as soon as we left.

It's fitting to solicit young riders to give their take on the place, since it was a group of youth who approached the Redmond City Council in 2017, asking them to help build a place where they could ride and practice. Having been repeatedly kicked out of the skate park and other locations in Redmond, those bike lovers—led by Trevor Elson, service manager at Trinity Bikes—wanted a place where they could be welcome to practice their skills.

On Oct. 19, 2018—nearly a year to the day from when this Redmond-focused issue comes out—the City of Redmond opened the Pump Track at Homestead Park, the very first asphalt bike track in Oregon. One in Hood River quickly followed. Funded by the City and a host of other individuals, businesses and clubs (by way of the Redmond Parks Foundation)—and designed by expert pump track people at Velosolutions, a Swiss company, Homestead has quickly become the go-to for local riders of many ages.

As defined by the City of Redmond, which owns and maintains the track, "A pump track is an asphalt trail which combines rolling jumps, banked turns & switch back loops. Bike riders of all ages and skill levels are drawn to them, teaching users the basic skills of carrying momentum, balance and speed by using your arms and legs to pump your bike around the track."

From steep berms to fun rollers, there's plenty to love about the track. Compared to the pump track at Phil's Trailhead, you're going to come home a lot less dirty, since this one is made from asphalt, not dirt, like Phil's and many other pump tracks.

But perhaps its only drawback: It's popular. Like really popular.

When I asked my companions, a trio consisting of a 6-year-old, a 12-year-old and a 16-year-old what they thought after riding it on a recent Sunday afternoon, that was their main critique: It's crowded. Here's what else those riders had to say.

"I think kids can ride at Phil's if they want to practice in the kids' area (the first circuit found at the Phil's pump track) before they go here, because there's not so many people," said Miles, a local 1st grader who sports a pink Huffy with coaster brakes. "Then they can go here (Homestead) to get even better."

"I liked that it was kind of a place where people who are new and people who are really good can go—some people can do tricks, some can learn," Kodes, a local 7th grader, said. "I think they can improve on space. It was kind of a small track, so when my sister stopped, it kind of went downhill, literally. I ended up landing and hitting my knee—again with the space thing. Be careful!"

"Some good parts of it were that there was a lot of different levels and features," said Deeds, a local high school student. "But it was pretty small, and it was crowded," she said. As far as the vibe, she said it was, "Good—maybe besides the people who were really good." 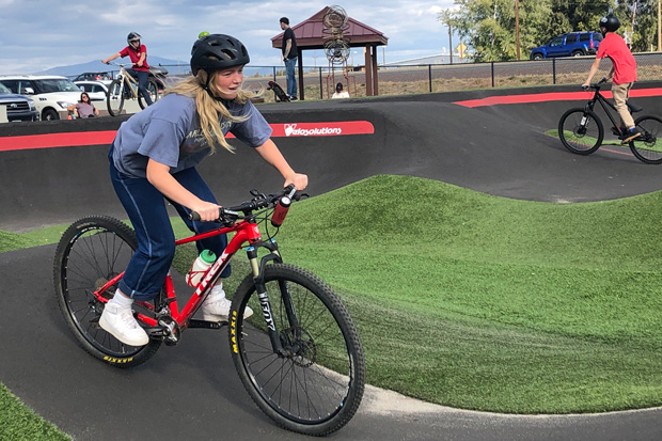 Nicole Vulcan
Deeds, age 16, about to hit a jump.

She's referring to the skilled riders who were racing across the track on this busy day—one literally jumping over a tiny kid who got in the way. Sigh. In addition to newbies, the subtle art of etiquette sometimes eludes those who are most skilled in sport. Elson, who has a special love for the park, having been instrumental in seeing it built, reminds riders to go counter-clockwise on the track to avoid collisions. But, "it's designed so you can drop in anywhere," Elson said. As for plans to build out more space for riders, Annie McVay of the City of Redmond says there are no plans as of yet. "We're just enjoying it for now," McVay said.