Oh, the Poor Old Porcupine | The Source Weekly - Bend, Oregon
Support local and vocal journalism! Become a Source Insider to help get news and culture to Central Oregon.
Become a supporter Support Us

Tales of the local "porky," a misunderstood creature of the east Cascades

Our poor old porcupines have been in man's gun sights since the first pioneer deemed it a pest. The porcupine is, unfortunately, a tree-eating mammal and Man's greed said, "That thing has gotta go!"

That attitude about porcupines only got worse the more we cut up trees for houses, killed beavers for coats and hats, cleared out brush for farms and killed birds for food, feathers and the fun of it. 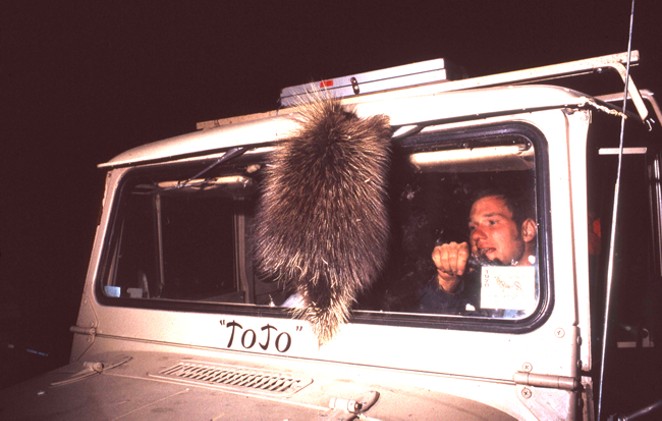 Photos courtesy of Jim Anderson
Left, Jim Anderson wrangles a porcupine with some degree of safety, while eying the quills stuck in his arm.

When I rolled into Bend in September of 1951 there were signs all over the forest, "Please kill porcupines!" And the impact of that movement can still be seen today. Porcupines are a very rare sight throughout their range, even in the alfalfa fields where they were once a serious threat when they got killed by the mower then baled up and (later) fed to cows.

One of the most important biological factors about porcupines: nature designed them to keep brush under control. That's why they have that formidable defense mechanism of needle-sharp quills they developed over time to help protect their chubby little bodies from fierce ground-based predators, like Saber-toothed tigers. The tree-eating business got started when we cleared the land of brush to grow stuff for humans to eat; the porkies opted for trees instead.

As a practicing naturalist today I had about given up on there being many porcupines left, not having seen one in the wild for a good number of years. Then, much to my surprise and pleasure what should arrive in my email but two photos of a baby porky from Pete Mayer, a kestrel nesting box pal of mine living near Tumalo! To say I was happy would be a gross understatement.

Mother Nature can be sneaky about the way she does things, and somehow, somewhere, a daddy and a mommy porky found each other in these trying times and managed to produce a youngster.

One of the most remarkable things about porcupines is their means of defense—those needle- sharp, very stiff hairs we call quills, or spines work very well. NO! They cannot "throw" them! But if you get close enough they can swing that tail of theirs with enough force to imbed them into your flesh far enough to cause a lot of pain, and in some instances requiring surgical procedures to remove them. Dog owners have dealt with this dilemma many a time.

When my old pal Don Kerr started the High Desert Museum, he wanted two exhibits to start it: one with raptors and the other with a porcupine.

Kerr was into the raptor business up to his armpits, so starting a Bird of Prey exhibit was a no brainer; but he didn't have a porcupine, or the slightest idea how to acquire one. So he called on another old pal of both of ours, Jay Bowerman, who in turn gave a shout to Jeff Cooney. Here's the way it went, in Bowerman's words:

"I have an indelible memory of the night that Jeff and I were out in the mosquito rig (at Sunriver) armed with a cardboard box to catch a porcupine for Don Kerr's newly completed but uninhabited porcupine exhibit.

"We found one on the bike path down where the culvert empties water from the lagoon system into the Deschutes. I was driving, and the headlights were on the porcupine and Jeff jumped out, grabbed the box and ran to put it over the porcupine. Of course, it wasn't inclined to wait to see what Jeff had in mind and it charged out of sight and into the darkness at the edge of the path.

"Jeff sprinted forward and jumped in front of the porcupine to get it to stop and landed waist-deep in the pond. The porky stayed dry. But it eventually ended up in Jeff's box and was delivered to the museum.

"But yes, I have really fond and warm memories of more than one porcupine. Even now, my good friend Chris Rombough three years ago rescued a female orphaned porky baby, and she and he have an incredibly close relationship.

"It will happily climb up into your lap if you've got a few raspberries in your hand. It is sweet and gentle, but a typical female in that she can be rather moody. And she hates taking her medicine which Chris has to hide in treats. He still insists that she is smarter than any of the cats his partner keeps at their places."

In case you're interested, there are New and Old World porcupines. Both are in the zoological Order Rodentia (rodents), and possess about 30,000 quills along their back and tail, which are really modified hairs composed of keratin. The largest species of porcupine, found in Europe, is the third-largest living rodent in the world—after the capybara and beaver. Now, I'll bet you didn't know all that, did you?

Porcupines can also be vocal, and use their teeth to make sounds which can be heard at a considerable distance. According to one record I found, they also have a wonderful memory, especially if treated badly.

And they have bare feet — four toes on the front and five on the back with very long and sharp claws. How else can you climb trees...?

That porcupine on the hood of George Long's Toyota got there because I was using George's rig for a ladder and got that porcupine by the tail (you can do that if you go with the grain) but it was too much for me, and I unintentionally dropped it. (I just wanted to bring it down a few branches for some photos.) George said, "Oh, leave it where it is Jim, we can drop it off on our way to Fort Rock from Christmas Valley!"

Which reminds me, in Oregon porcupines are found mostly on the east side of the Cascades, and only a few scattered locations on the west side.

There are predators that can kill and eat porcupines, like Golden Eagles. In my over 50 years of keeping an eye on eagles, which included trespassing in their nests and banding their babies, I found skinned porcupines in nests and occasional young eaglets with quills in their feet and legs.

Oh, and one more thing: porcupines do not hibernate and are active throughout the year. They also enjoy being out at night more than during the day—and if you're a caver, watch out you don't stumble over one.

Don shouted, "What the hell is that?!" I could see their eyes reflecting from my headlamp and told him what was coming and to turn his face to the wall to escape getting slapped by a tail. They waddled out of the cave right past us in the narrow passageway, and I noticed they were grinning.

More Natural World
All Outside