Do these creatures really have 1,000 legs?

There are probably not too many of you wonderful readers who play games with millipedes and centipedes every day, and probably wouldn't care if one got into your old socks—but in case you've ever been curious about them, please read on.

I gotta' tell you, I've been seeing and wondering about 'em since I was a kid on the farm near the town of West Haven, Connecticut. It was creatures like millipedes that helped me get the nickname of "Catsfur" not too long after I started walking and exploring this magnificent planet we call Earth—our Home away from Home. 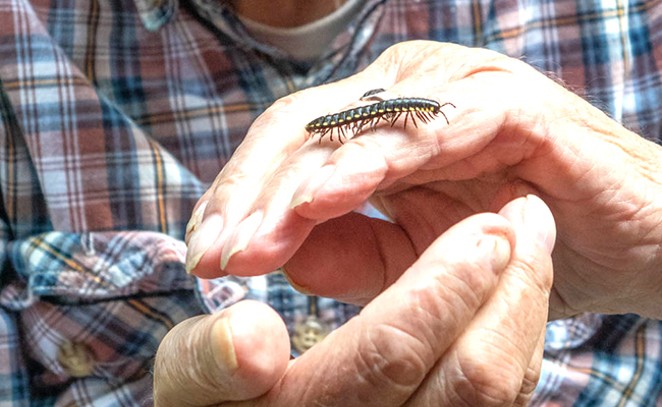 When I came upon something I didn't understand or recognize, I'd ask the nearest adult, "What's this, or that fur?" And one day my Uncle Horace, exasperated, blurted out, "Catsfur!" And it stuck.

Anyway, in the event you didn't know, and would enjoy knowing, the first evidence of millipedes was discovered by scientists exploring rocks in England from what we know as the Silurian Period, a span of about 24.6 million years.

Mother Nature has been creating and modifying Life on this grand old planet, and at one time, a few hundred million years ago, millipedes were as big as a car.

The illustration of that millipede draped over the front of a van was done by my grandson, Daxon. I asked him to make a drawing of the giant fossil millipede found in England, and that's his rendition.

Some paleontologists (people who study fossils) say the fossil of a giant millipede found on a beach in Northern England revealed evidence of the biggest bug that ever lived on Earth—and the Silurian is known as the shortest period of the Paleozoic Era. Geologists throw around millions years like we do hundreds.

Back in the mid 1800s two very bright and busy scientists, Roderick Murchison and Adam Sedgwick, began poking around in a bunch of fossil-bearing sedimentary rocks in England no one had checked before.

Murchison named his sequence of rocks for a Celtic tribe of Wales, the Silures, which inspired his good friend, Sedgwick to name his discovery the Cambrian, from the Latin name for Wales. The two then put them together to tell their story.

Neither one of these two eminent scientists saw it coming, but after—and probably during— the presentation of their scholarly paper, entitled "On the Silurian and Cambrian Systems- Exhibiting the Order in which Older Sedimentary Strata Succeed each other in England and Wales," they started to argue about each others' viewpoints and their friendship went to hell in a hand basket. However, not realizing it, their work turned out to be the germ of the modern Geologic Time Scale.

That was also the time when paleontologists named the discovery of a new group of arthropods—animals having an exoskeleton, a segmented body, and paired jointed appendages, "arthropods." They are distinguished by their jointed limbs and cuticle (outside skeleton) made of chitin (the stuff our fingernails are made of) often mineralized with calcium carbonate, which allows some species to swim, walk on solid ground and/or fly.

One group, known as Myriapods, include centipedes and their cousins, millipedes. As the names indicate, one has 100 legs and the other 1,000. However, as it turns out neither has those numbers, just seems like it. BUT the difference between the two is very noticeable.

And here we are with my discovery of what I'm calling the Eugene Millipede, because it has the leg numbers and assembly of the many, many, many species of millipedes known throughout the world, but I found it in Eugene, Oregon.

In Merrill A. Peterson's "Pacific Northwest Insects," he states, "Millipedes are slow-moving invertebrates that form their own class of Myriapod arthropods.

"Their bodies show a plethora of modifications on a basic plan of a cylindrical body that has two pair of legs on most segments. Globally, there are more than 10,000 known millipede species, but the actual total may be eight times this many."

So, when I'm in Eugene and I see one of the many "Eugene Millipedes" that's what it is, and when I'm in Sisters and Bend I'm seeing many of the "Sisters and Bend Millipedes." However, when I see a millipede with yellow spots on the outside of each body segment, I know it's the Yellow-spotted Millipede, Harpaphe haydeniana.

I almost literally stumbled across the Blind Millipede while exploring Lavacicle Cave in the Deschutes National Forest out east of Bend. It would have been the Lavacicle Millipede, but it doesn't have any eyes.

Now, just to set the score straight, centipedes have two legs per body segment, while millipedes have four (two pair). Both groups are predators of animals smaller than they are, which is the way it has been since Silurian times. I know, I was there and I'm 94.

And now you know enough to go out and find one of your own.

Pesticides are Killing Us: Every day we learn about the dangers of using chemicals and causing insects to vanish from the Earth

Mariposa Nocturna in Your Backyard: What denizens of the dark roam your backyard at night?

More Natural World
All Outside