Uproar at the OLCC | The Source Weekly - Bend, Oregon
Support local and vocal journalism! Become a Source Insider to help get news and culture to Central Oregon.
Become a supporter Support Us

Uproar at the OLCC

The past few weeks haven't been kind to the Oregon Liquor Control Commission's Bend office.

Last week The Oregonian highlighted a pending case that alleges the OLCC Bend regional manager and human resource director recorded internal meetings without the full consent of those present. The Bend police department is investigating the complaint, which was filed by an employee who had been released from his one-year trial period with the government agency.

Christie Scott, the OLCC's public affairs specialist, said the recordings are merely a misunderstanding between managers and staff and that the complaint was filed by an embittered former employee.

"It was agreed upon that we would announce verbally that we were recording," Scott noted of the February meeting, the meeting in question. "Ostensibly, everyone should have been on board with this."

Whether OLCC employees, who had gathered at that meeting to air their grievances, were or were not on board remains in question. But accusations of secret recordings at Bend's regional office seem to be only the tip of the iceberg. Complaints from former employees are wide-ranging, varying from general mismanagement to illegal acceptance of gifts.

"Once Katie Siefkes was promoted to regional manager it became a hostile work environment," said Alicia Mann, who worked under Siefkes as an administrative specialist at the Bend office for four years before she quit in February. It was Mann who, at least in part, initiated the February meeting.

Mann said she was stuck in an uncomfortable position because Siefkes had developed a close personal relationship with Bonnie Barasch, the OLCC's human resource director who, under normal circumstances, would field such complaints. To circumnavigate the situation Mann went to OLCC Public Safety Director Rudy Williams. Williams is no longer with the OLCC and Mann has since taken a position with the Oregon Department of Fish and Wildlife.

Another former employee, who wished to remain anonymous, claimed that Siefkes accepted two bottles of wine from an area distributor. The OLCC's Christie Scott said she could neither confirm nor deny if Siefkes took wine, but said staff is allowed to accept gifts valued at $25 and less. Hypothetically speaking, Scott added, if Siefkes did accept the wine and if the value exceeded $25 she could share with employees, thus spreading the value of the gift among several people. Siefkes deferred all questions and allegations to Scott.

Still, Mann is concerned for her former co-workers, who she said are afraid to come forward for fear of retaliation.

"The region can't operate when the morale is so low," Mann said. "It's a shame because it's a government agency that's already looked down upon."

The recording case should soon be in the hands of Deschutes County District Attorney Patrick Flaherty. Flaherty was unsure why he hadn't yet seen it—he even called the Bend police department twice to check its status—but he promised to put the case on the fast track once his office received it.

"Given the circumstances, when it comes to us we will deal with it expeditiously," Flaherty said.

Correction: The OLCC's Christie Scott was initially, and in this story, incorrect about how and when OLCC employees can accept gifts. After we went to press Scott directed us to Oregon Administrative Rule 845-004-0005, which deals with gifts and gratuities for OLCC employees. The rule plainly states that OLCC employees may not accept gifts of any kind from any licensee if that gift isn't also offered in equal amounts to the public.

OLCC's drawn out application process a burden to the industry 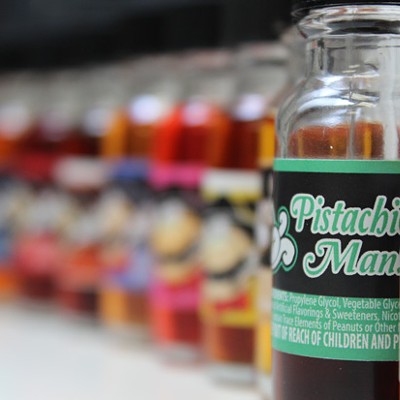 Oregon is Ready to Get the Nation High